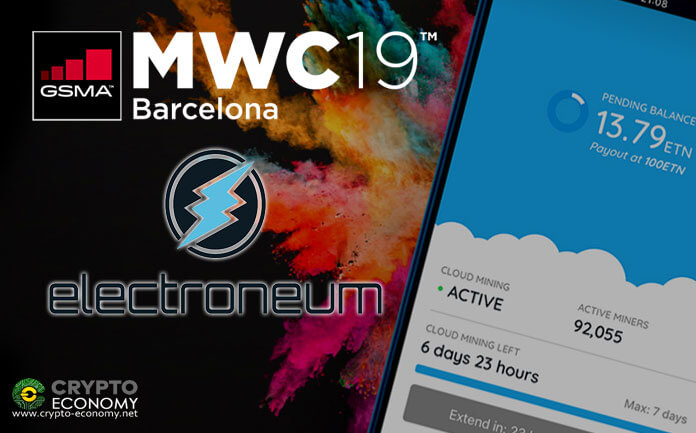 Electroneum, quite active lately, has been sealing partnerships with different companies to help establish its cryptocurrency in more countries and thus win users, the company has now announced the launch of a new smartphone that, according to the team, should revolutionize the mobile industry.

In the Mobile World Congress Barcelona of this year, the company Electroneum unveiled his brain new smartphone with a bunch of features set to reach directly the everyday user and the people that don’t want to use or prefer to avoid the traditional banking system.

Indeed, the smartphone presents an incorporated cloud mining technology that allows every user to mine cryptocurrencies, in this case, his crypto ETN, anywhere through an app of the smartphone.

The benefits don’t end with just the features, the smartphone comes with an outstanding price of $80, for this price the user get a new Android certified smartphone with relatively acceptable specifications.

The new smartphone is not expected to compete with the top flagship smartphones in the industry, but it does present some good functionality, like a 4G band and a dual-sim capacity.

Richard Ells the Electroneum CEO and founder said about the new smartphone that it was the result of the perfect team of specialist:

“With our experience in tech, we were able to gather a world-class team consisting of telecommunications, manufacturing, emerging area mobile-operators, product design and marketing specialists, all helping to make this utopian vision of ours a reality.

Without the broad range of talent and expertise, we could never have imagined the possibility of making a product of this calibre accessible for anyone in the world, and we are extremely proud of the result”

It is also good to notice that this new improvement stand out from the crowds, cryptocurrencies like Bitcoin are mineable, but only with adequate pieces of equipment, with his new smartphone that incorporates cloud mining, anyone can mine cryptocurrency with their smartphone alone, a step forward to make cryptocurrencies accessible everywhere.

Since his very beginning, the Electroneum goal was quite clear, providing a transaction medium to people that don’t have access to the traditional banking system, with his partnerships with South African companies and the launch of this new Android smartphone, the company is confirming, even more, its priority.

0
A proposal from the Financial Conduct Authority (FCA) of the United Kingdom to ban ETN trade has not been well received by Coinshares. However,...
Read more
Companies

0
Founded in 1938 by Lee Byung, Samsung is a South Korean based company that comprises of several affiliated businesses, mostly majoring on the Samsung...
Read more
CryptoCurrency News

0
Electroneum has taken bolder strides in expanding its influence in Africa as its coin ETN got listed on the South African cryptocurrency exchange, Artis...
Read more
Tutorials

0
The World Ethical Data Forum (WDF), which will take place at the World Trade Center in Barcelona, will be held on September 19 and...
Read more
- Advertisment -