What is PancakeBunny Finance? All You Need to Know

Binance Smart Chain (BSC) blockchain network is currently home to many innovative DeFi protocols. DeFiStation, the DeFi tracker for BSC-based protocols, currently lists 85 projects. Sometimes ago, Ethereum was the unrivaled champion of the DeFi market. As Ethereum is a second-generation blockchain, its performance was always hindered by low scalability. As DeFi activity grew on the network, the problem got worse as low TPS resulted in high gas fees.

According to BitInfoCharts, Ethereum’s average transaction fee on August 13 was $18.256 that also went to $69.922 on May 12. These problems allowed other blockchain networks to enter the market such as Binance Smart Chain (BSC).

According to some reports, large transactions on Ethereumcan regularly cost more than $100. The highest average seen was in May 2021 at $68.72. This trend has begun to change, but Ethereum is still currently more expensive. On the other hand, a BSC transaction rarely surpasses even $0.25.

BSC was launched less than one year ago and already is a genuine challenger to Ethereum. These low fees have contributed to BSC’s rise more than any other feature. Therefore, many innovative and successful DeFi protocols are hosted on BSC. Just 10% of the DApps on Ethereum serve a DeFi function. However, BSC despite being a much smaller ecosystem, sees about 75% of its DApps exist as part of the DeFi ecosystem. PancakeBunny is one of them.

According to PanCakeBunny documentation, it is a DeFi yield aggregator and optimizer for the Binance Smart Chain, which is used for PancakeSwap (CAKE). The protocol allows users to earn higher interest on their underlying crypto assets through its advanced yield optimization strategies.

The protocol is developed by DeFi startup Mound and went live in December of 2020. PancakeBunny farmers obtain permission from private individuals to automatically add and reinvest income on their behalf through mono-contracts. The documentation describes the protocol as:

“The PancakeBunny protocol empowers farmers to leverage their yield-seeking tendencies to optimize yield compounding strategy on BSC. We are providing strategies for the various needs of farmers from the highest yield seekers to the risk-reward optimizing smart investors.”

The majority of the PancakeBunny Finance farms exist on PancakeSwap. On the protocol, farms get permission from individuals via smart contracts to automatically compound and reinvest yields on behalf of individuals.

According to DeFi Station, PancakeBunny is currently the 10th largest DeFi protocol on BSC in terms of TVL. Once it was the fourth-largest protocol by TVL. It currently locks $724.32 million on its platform.

To bring high returns for its users, PancakeSwap offers three distinct products built on top of the Binance Smart Chain (BSC). They are Vaults, ZAP, and Pot. Let’s take a look at them. 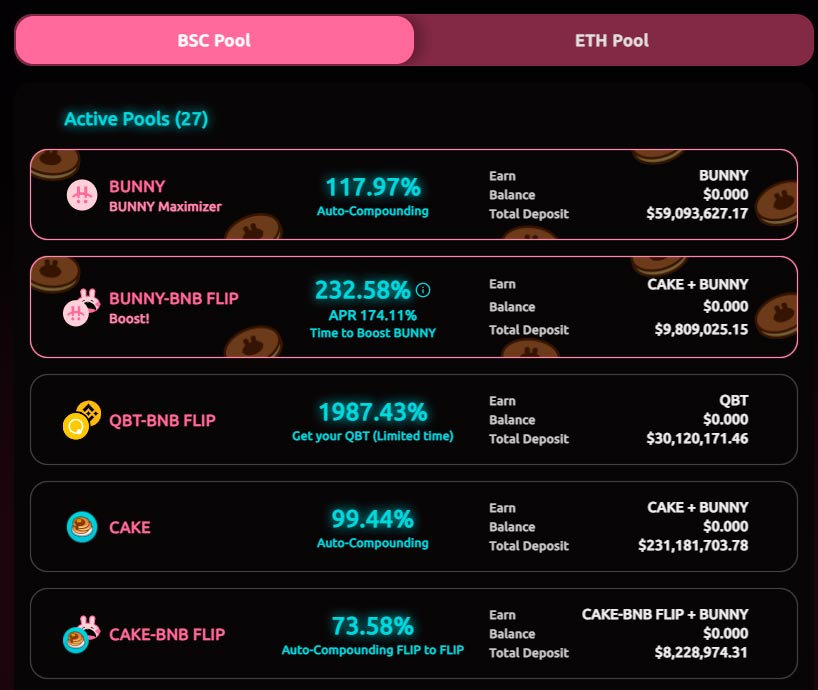 Vaults is the name given to PancakeBunny pools. PancakeBunny currently has 27 active pools or farms on BSC and three on Ethereum. Vaults allow farmers to lock their crypto into a smart contract while earning interest on it. The interest earned will be auto-compounded into the vault to earn more yield, thus saving gas fees for every transaction while preventing the hassle of depositing the assets manually. It is important to note that not all vaults are auto compounding.

These vaults are divided into the following categories:

In this farm, users can stake using their BUNNY tokens, while getting back WBNB. This farm does not offer an auto-compounding feature. This pool has no withdrawal no performance fee.

According to the documentation, the return for the BUNNY staking pool is dependent on the performance of all the other farms as the 30% performance fee on other farms is collected and given out as the reward.

In this farm, users can deposit BUNNY/BNB to earn more BUNNY tokens. This farm incurs a withdrawal fee of 0.5% of the withdrawal amount that will only be applicable while taking out assets within 72 hours of deposit. The timer is reset each time a user makes a new deposit.

For example, the CAKE-BNB FLIP auto-compounding farm requires CAKE-BNB FLIP tokens that can be obtained by providing liquidity to the PancakeSwap CAKE-BNB FLIP pool. This LP token can then be deposited in the pool.

For these pools, users will be getting the respective LP Token of the pool, as well as BUNNY tokens as profit.

But users can also get LP tokens directly by using PancakeBunny’s ZAP feature. This feature will be discussed later.

PancakeBunny documentation describes these farms as:

“The Maximizer farms take the profits that come out of the original compounded Pancakeswap farm, and puts it into the CAKE auto-compounding farm, in order to give you a higher APY, while protecting your principal. There should be a withdrawal fee of 0.5% if withdrawn within 72 hours. With the Maximizer Farms, users can claim their profits, without exiting the farm.”

What is ZAP Feature? 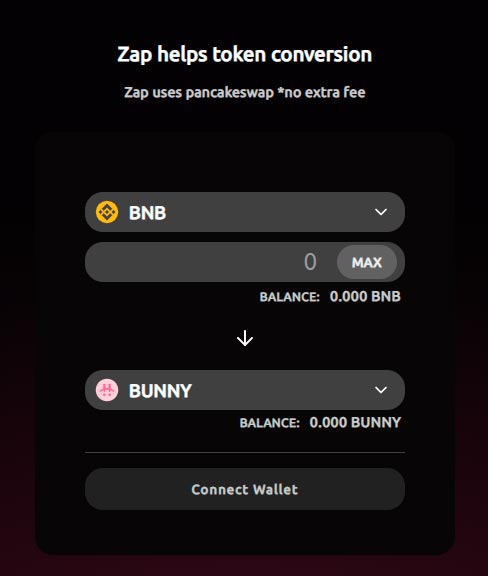 ZAP is an amazing feature of PancakeBunny that allows users to get LP token without leaving the protocol or adding liquidity to PancakeSwap to get LP tokens. As we know, there are 20 farms that require LP tokens to earn yield.

For example, if a users want to deposits funds in CAKE-BNB FLIP farm but does have only BNB in its wallet, he can use ZAP fearture to swap BNB for CAKE-BNB FLIP LP token. Best thing is that these SWAP does not incur any additional fee.

ZAP uses PancakeSwap in the backend to perform the required job and it is made to enhance the user experience at the bottom level. As ZAP is based on PancakeSwap’s swap feature, PancakeBunny does not provide any slippage control on swaps through ZAP.

What is Bunny Pot?

According to the documentation, “a Bunny Pot is a no-loss ‘jackpot’ pool.” In Bunny Pot, users satke their assets during an “Initial Staking Period” which lasts for 24-hours. At the end of this initial Period, the Pot pool is closed to further staking and the farming period of 6 days begins. In this period, Bunny Pot farms all of the pooled assets to generate a pooled yield.

At the end of this farming period, a winner is randomly selected based on a composite weighting which is calculated by multiplying the number of token he staked with a Speed multiple (S) and the History multiple (H) (# Tokens x S x H). The winner receives all of the generated yield.

Bunny Pot is a no-loss pool as it just farms tokens as others do. The difference is that all of profit goes to a lucky winner. At the end of the Farming Period, everyone who participates is returned their initial stake.

BUNNY is the BEP20-based native token of PancakeBunny. The initial documentation suggested that the BUNNY token doesn’t have a max supply. But the CoinMarketCap data shows that BUNNY has a maximum supply of 1 million and the current total supply is 910,789 BUNNY.

Perhaps the documentation is not updated as the initial documentation reads that team might “establish new strategies to limit the cap or burn some tokens.” It seems that suuply is now hard capped.

For every 1 BNB earned in the performance fees, 15 BUNNY is minted. Users earns BUNNY by using the farms, or buy BUNNY through its ZAP function. Approximately 13%of the minted BUNNY will go to the team to ensure continuous development and innovation in the protocol.

Currently, BUNNY price is all over the place. BUNNY was at its ATH of $553 on April 27, 2021. The May 20 flash loan exploit gave devasting blow to its price. The token is now changing hands at $7.62 at the time of writing.

BUNNY is the governance token of PancakeBunny Finance. BUNNY holders governs the ecosystem and receive the majority of farm performance fee profits. Token holders stake their in the BUNNY Governance Pool. Here they receive BNB coin as rewards determined by the number of BUNNY tokens they contributed to the Governance Pool.

By staking in the BUNNY Governance Pool, they also eligible for voting. The protocol currently uses snapshot voting system for making decisions within its community. The more a user stakes, the higher his/her influence in the ecosystem. The team has plans to bring a more concrete governance tokenomics ecosystem, perhaps by introducing a new, separate governance token.