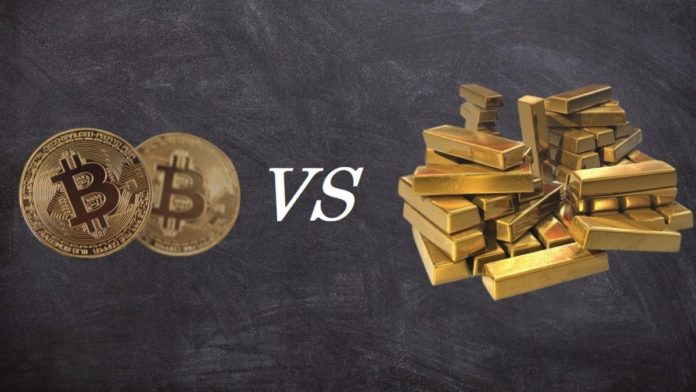 The US Money Reserve, one of the country’s largest distributors of U.S. Government issued gold, silver, and platinum coins, just dropped in a study evaluting the long term performance of Bitcoin (BTC) and gold. Which one is better? Let us delve deeper into the study to find out.

The Covid-19 pandemic has taught us different lessons about a number of aspects of life, but one of the most important ones was about savings and investments. During the pandemic, more and more people moved towards safe-haven assets. Gold has always provided good returns on our investments but with the burgeoning cryptocurrency industry, digital assets have given even better returns than gold.

Earlier, the traditional move was to hedge against stock volatility with gold. It was an extremely effective method in the past, but a new alternative has emerged which is challenging the old-school safe-haven method.

#Gold hit near a one-month high today as the U.S. dollar declined. Read more: https://t.co/IPskBboVmw
It's not too late to start the process of portfolio diversification! Click to order a Free Gold Info Kit to learn about the benefits of owning gold: https://t.co/gL4fTDsNNH

According to the US Money Reserve, gold has a substantial history dating back, originating more than 5,000 years ago. Gold coins premiered as a form of currency around 550 B.C., pre-dating the introduction of paper money. The yellow metal has since proved its mettle assuring a guranteed return. The US Money reserve argured,

“One of the main reasons gold bullion has going for it is that it’s a tangible asset that you maintain control of, no matter what happens to the global economy.”

However, unlike gold, cryptocurrencies are not considered a safe haven by many analysts as the value of Bitcoin (BTC) and other digital tokens dont reside in an established history of commercial usage or long-established cultural tradition. The precious metals company added,

As per a Barron’s article, the gold verses Bitcoin (BTC) debacle is an unevenly matched game as the limited history of the cryptocurrency makes it difficult to clearly define its role in a portfolio. As cryptocurrencies are still at an infancy stage, it is difficult to determine if digital tokens acts as a safe haven over the long term or if it behaves more similarly to speculative assets. The article stated,

“The cryptocurrency market’s recent troubles are at odds with the prevailing narrative of the past few years, which preached that these digital assets would take the place of [gold] as a haven in turbulent times. It should be clear now that the opposite is true.”

What is Expert’s Take on the Age-old Debate?

Will Rhind, founder of a leading ETF company, GraniteShares, said that Bitcoin (BTC) and other cryptocurrencies may be siphoning some capital away from gold, but it’s too early to say if it’s because they successfully hedge against inflation. He explained,

“The reason why people are buying bitcoin and cryptocurrencies at the moment is highly speculative. That’s a complete risk-on situation. It’s less defensive in my mind. The reason why people are buying gold at this point is much more defensive. It’s around the inflation story. It’s around the long-term preservation of capital or purchasing power.”

#Bitcoin’s limited track record and volatility can be summed up in one word: extreme. George Milling-Stanley makes the case for #gold over #crypto.

Experts believe that although Bitcoin (BTC) has registered 100x improvement over gold as a store of value, it is likely to continue appreciating in US dollar terms over the coming years. George Milling-Stanley, chief gold strategist at State Street’s SPDR ETFs, asserted that the historical promise of gold to investors has always been twofold. One, that over the long term, gold can improve the returns and it can also help to reduce volatility. He expressed,

“In Dec. of 2017 Bitcoin hit a high of just below $20K. Bitcoin has been dead “money” for the past 4 1/2 years, as its current price is about 2% lower than it was then. In contrast, the price of gold has risen by over 40% during the identical time period.”

#Bitcoin is not digital #gold, it is digital fool's gold. In fact, since the price of Bitcoin is negatively correlated to the price of gold, it is a digital anti-gold. I'll be debating this LIVE with @RichardHeartWin. Make sure to secure your place here: https://t.co/33I8XZEH4l

In a statement, Sylvia Carrasco, CEO and founder of the gold exchange platform Goldex, said that while Bitcoin (BTC) is a more recent form of investment that is certainly receiving a lot of hype, gold has retained its value through centuries. She continued,

“Gold has long been considered to be the safe-haven asset of choice, and, while bitcoin is ‘the new kid on the block,’ it’s debatable that it will eat into gold’s market share for a number of reasons. Bitcoin and gold both have significant advantages over fiat currencies because neither can be diluted or debased.”

Bitcoin Can Be an Alternative to Fiat Money

The US Money Reserve emphasized that gold is considered a traditional hedge against the stock market and, now more than ever during the current economic turbulence, gold should be considered as part of a diversified portfolio.

💻"Bitcoin is the evolution" says Chris Kline as he describes it as "a unique addition for an alternative to your retirement planning". Learn more from today's #TheFutureofBizTech podcast⤵️https://t.co/sW0jpB1WBr pic.twitter.com/N27eNUnWFE

However, in support of Bitcoin (BTC), Chris Kline, COO and co-founder of Bitcoin IRA, a firm that allows individual investors to purchase cryptocurrencies, specified that the cryptocurrency’s potential to act as a defense against the money printing of central banks. He reiterated,

“Bitcoin has a finite supply. The government has been printing unprecedented amounts of money since 2008, and it is starting to have an impact on the wider economy. That manipulation cannot be manufactured in the same way since Bitcoin is limited to only 21 million coins, providing an alternative to the fiat money system.”

0
As Anthony Scaramucci, the CEO of Skybridge Capital, said on Monday, there are two factors that will drive bitcoin's demand in the long term....
Read more
- Advertisment -
Posting....