Electroneum coin (ETN) is a British virtual currency launched in September 2017 created from bitcoin‘s open source. This cryptocurrency combines a decentralized blockchain with a marketing application to provide better accessibility to users.

Designed for a common and widespread use, Electroneum is defined as a mobile cryptocurrency built on a blockchain derived from Bitcoin.

From the first moment, its objective has been to capture smart phone games, as well as the entire segment of online gambling.

In that sense, the creative team has put great care in making it easy to use in all kinds of mobile devices, being powered by a simple digital marketing application, ideal for fast transactions online. A revolutionary idea that is beginning to gain followers in the market.

The great impact of its ICO on the virtual currencies market has been demonstrated from the moment of its crowdsale, when it became one of the largest token sales by number of users of all time, with more than 120,000 contributors and an amount of users that exceeds the barrier of 300,000 registers, a figure that continues to rise today.

This impressive fundraising has been used to complete the development of electroneum, which is now used by more than 2.2 billion smart phone users around the world. 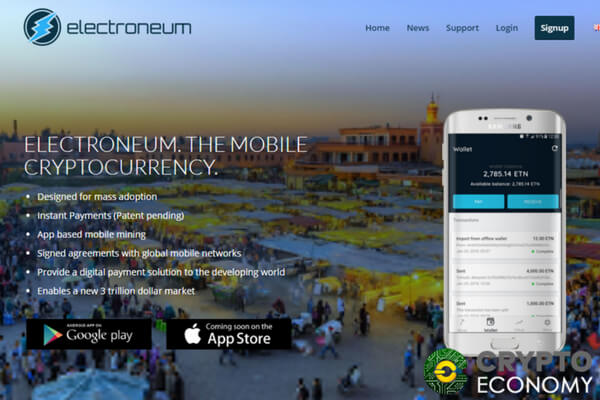 How does Electroneum work

Electroneum offers a practical app that makes it possible to manage funds online, send and receive payments easily and conveniently through a simple scan of a QR code.

Additionally, the user has the possibility of obtaining benefits through mining virtual money.

When operating with the electroneum coin, you will notice that transactions happen faster and they are more anonymous, with an optimal protection of the transaction history, as well as the content of your wallet. All this without forgetting to leave transaction hashes of public access, for the due transaction authentication

Electroneum was created by a group of English developers under the leadership of Richard Ellis, being in fact the first British team to launch a digital currency. The leader has more than 20 years of experience gained in a digital agency called SiteWizard.

In 2013 Mr. Ellis founded Retortal, where he offers marketing advice in social networks to several companies.

The development of the new virtual currency (electroneum coin) dates back to July 2015, when the company was officially formed under the name of Electroneum Ltd. initiating its promotion actively, although during that date it did not have a definite name for the product; on August of the same year it was baptized with the name of Electron.

Where does Electroneum go from here?

As we have already said, the main idea of the creators of Electroneum is to make the cryptocurrency available to anyone with a mobile phone. Apart from being something laudable, this is certainly very useful for those who live in the poorest countries, where most people do not have access to a PC or a laptop.

One of the reasons why this project is having a great acceptance in the developing world, is the possibility of saving costs by sending remittances internationally using the companies services for the cash transfer.

If something distinguishes Electroneum coin (ETN) from the rest of the currencies of the digital world, it is the first and only one that offers you the possibility to mine with a mobile device, as well as being able to do it using your PC, without needing the use of special hardware, having any kind of programming knowledge or paying onerous electricity bills.

Mining ETN is as simple as downloading the app, logging in and clicking start mining. Without a doubt it is a great feature. 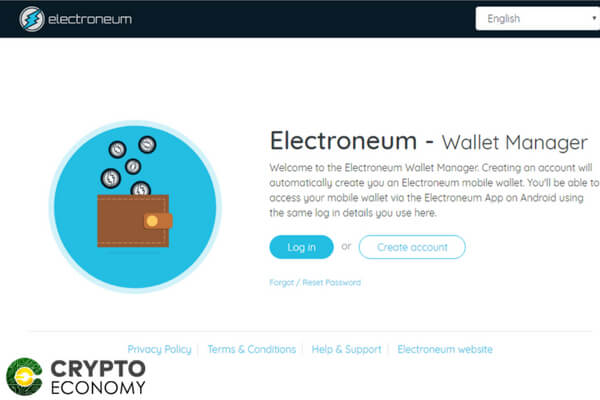 To create your wallet, the best option is to use the service provided by the official site of this cryptocurrency. The first step is to access the Electroneum website.

Click on “Create Account” and fill out the form with the requested information. The top menu of the page allows you to change the language.

By following the steps indicated until the end, you will realize that the Electroneum team takes the issue of security very serious.

Where to buy Electroneum coin (ETN)

Since this is a fairly new digital currency, for now there are only a few exchanges that include it in their offers lists. In this case it is best to stay tuned and review the updated lists of the main markets.

Meanwhile you can use the services of exchanges such as Cryptopia, which accounts for almost 90% of Electroneum coin transactions.

0
Electroneum has taken bolder strides in expanding its influence in Africa as its coin ETN got listed on the South African cryptocurrency exchange, Artis...
Read more
Companies

0
As expected, the Mobile WorldWide Congress 2018, which took place at the end of February in Barcelona, ​​has been the scenario used by Electroneum...
Read more
CryptoNews

0
From Monday, February 26, until Thursday, March 1, we can enjoy in Barcelona the Mobile WorldWide Congress, an event where the latest developments in...
Read more
Opinion

Electroneum: The McAfee bet to 2018

0
Electroneum is a British cryptocurrency that was launched through an ICO or initial coin offerig on September 14, 2017. It is developed for the...
Read more
- Advertisment -
Posting....