The cryptocurrency market expanded rapidly after the 2017 ICO bubble, from an approximate $566B market capitalization at the end of 2017 to $1.5 trillion in February of 2021. This means that there should be a sound infrastructure to support the ever-increasing trading of cryptocurrencies.

After the introduction of smart contracts in blockchain with the launch of Ethereum, decentralized exchanges (DEXs) attempted to solve the underlying problems of CEXs by facilitating trades with smart contracts, removing third-party control of trader funds. But that came at the cost of the speed and performance of a blockchain network.

Putting all the trading activities on-chain slow down the network. So, a group of cryptocurrency traders built a solution on the Ethereum blockchain that rests in middle, one that provides speed without compromising the security of DEXs. They named their solution IDEX.

What is IDEX Exchange?

IDEX is an Ethereum-based decentralized exchange (DEX) launched by a group of cryptocurrency traders in 2017. It claims to offer real-time trading of cryptocurrencies with support to limit and market orders, gas-free cancels, and the ability to fill many trades at once.

IDEX 2.0 also maintains this same off-chain matching and on-chain settlement but with powerful new features and scaling solutions. Let’s take a look at how does it work?

How Does IDEX Work?

Before the introduction of IDEX, conventional DEXs took the term most literally, building fully on-chain models in which all orders interact directly with each other. This approach achieved decentralization but made trading slow and expensive as each process from placing an order to

modifying or canceling an order incurs a network fee and depends on the time in which a blockchain network confirms a transaction. Below are the features of the IDEX exchange.

IDEX exchange uses a hybrid design where trade execution and settlement happen as separate events. On the IDEX platform, transactions execute in real-time but settle minutes later at the speed of the network.

To make this possible, all transactions, such as deposits and trades, are authorized by end-users and their private key. However, IDEX maintains ownership of broadcasting certain authorized transactions to the network.

The below diagram describes the working of IDEX. 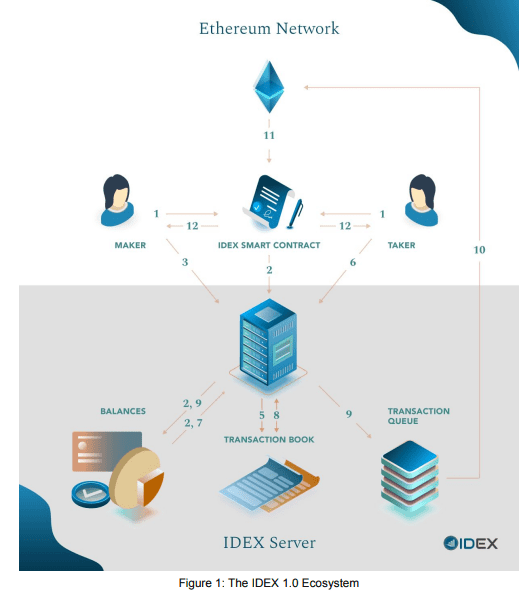 According to IDEX Whitepaper, trading on IDEX works as follows.

IDEX uses a deposit contract that acts like escrow and temporarily locks the funds before allowing the user to authorize a limit or market order. This ensures that funds are available not only at the time of execution but also at the time of settlement eliminating trade failures.

This is an important function that ensures that only IDEX can submit signed trades to the Ethereum network for settlement and allows the exchange to control the order in which transactions are processed and to settle trades on-chain in the same order they are executed off-chain.

According to IDEX, O2 Rollup allows for unlimited off-chain scaling with a fixed on-chain settlement cost, removing bottlenecks and costs that have prevented DEX adoption. IDEX 2.0 has been rolled in three phases.

In the first phase, a breakthrough in performance was provided where trades still settled on-chain individually but makers incurred no gas fees, while takers pay a small gas fee per trade. In this phase, new off-chain components were added that generated real production data while still relying on the battle-tested on-chain settlement mechanisms.

In phase 3, the on-chain settlement was fully transitioned to the layer-2 system, eliminating taker gas costs entirely and setting the stage for unbounded scale.

IDEX is also the native token of IDEX exchange that is used in staking. IDEX staking enables traders, market makers, and IDEX users to operate part of the IDEX infrastructure and, in the process, contribute to the security and performance of the platform.

On IDEX, staking is a two-tier operation.

Tier 1, Validator Staking: Tier 1 are validator node operators. A validator node (VN) is a staking client run by members of the community that enforces the validity of the layer-2 ledger.

To participate in the validator network, VN operators must deposit IDEX tokens into a staking contract. VN operators review all transactions published to the off-chain ledger, confirming the transactions, and Merkle root for the correctness and calling fraud-proof enforcer functions in the event an issue is identified.

They are rewarded in IDEX tokens through a pool seeded by IDEX. According to the IDEX website, the Validator staking is yet to be live.

Tier2 is also replicator staking where users stake IDEX tokens and run a lightweight node. They earn 50% of all IDEX trade fees paid every 2 weeks in ETH and BNB.