The Crypto Of The Month: Waves 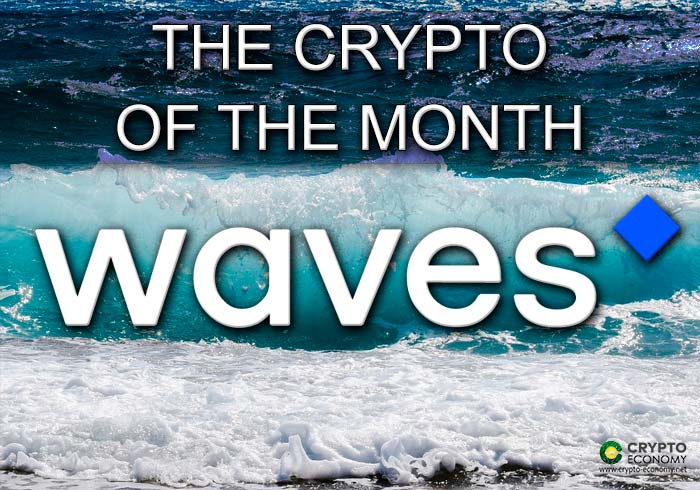 As every month, from Crypto Economy we have selected a project from among all those that make up the blockchain ecosystem, projects that for us have great potential and we believe can contribute and help in the change we are experiencing towards the adoption of cryptocurrencies. This section called “The Crypto of the Month“, is accompanied by a giveaway with which we try to encourage the interest of our readers for these projects.

Waves is a project launched in 2016 by the Russian businessman Sasha Ivanov, whose crowdfunding campaign managed to collect nearly 30,000 Bitcoins (16 million dollars at the time), becoming one of the platforms that had raised the most through crowdfunding. In the event a total of 100 million tokens were released, of which 85 million were sold and 15 remaining were reserved for other needs.

In June 2017, Waves Platform announced the integration of the payment gateway in dollars in the Lite Client, which offers its users the opportunity to charge their account in US dollars.

From Waves Platform, any user can issue their own cryptographic token and raise funds for their project through a crowdfunding campaign.

To find a distributed consensus, Waves uses the PoS algorithm (Proof of Stake) where it is necessary to own 1000 Waves to create a node and the chances of finding a new block depend on the number of Waves in possession.

For users who can not or do not wish to create a node, they have the possibility of using the LPoS algorithm (Leased Proof of Stake) where they can delegate their Waves tokens to a node and obtain a part of the rewards that they obtain.

Waves Keeper is an extension for web browsers (currently works in Google Chrome, Firefox, Opera and Microsoft Edge) that allows you to keep your keys secure, as they are stored within the extension and can not be accessed from external applications. In addition, users can sign transactions without using their private key or password.

Waves Smart Accounts were the first phase for the launch of the smart contracts of the platform, which unlike the Ethereum smart contracts, did not need GAS to work. According to the Waves team, these Smart Accounts provided the most popular and demanded functions by the community, such as; Multi-signature wallets or atomic exchanges among other functionalities.

In May of 2018, Waves launched the testing of its Smart Contracts, which has been divided into 2 parts, a first one for the “No-Turing complete” contracts and the second part where its mainnet was launched and the contracts were activated. “Complete Turing”.

In one of the articles of the Waves Blog, Waves founder and CEO, Sasha Ivanov, commented:

We are creating a user-friendly blockchain platform that will be easy for anyone to use. To achieve this we are trying to look at the system through the user’s eyes and understand what they most need. This is the essence of our approach to Smart Accounts.

From the decentralized Exchange of Waves, users can establish, issue and distribute their own tokens. In the Waves DEX, users’ funds are stored in their own wallets, instead of the exchange’s wallets, which provides extra security.

You can get more information about Waves in:

In this giveaway, 100 Waves will be distributed among 5 winners, these prizes will be divided as follows:

The Crypto of the Month: Waves – Crypto Economy Giveaway – 100 WAVES in prizes!

The giveaway will be carried out through the Gleam platform, where we will propose a series of actions (click on like, retweet, visit a page …), which will be assigned tickets to the participants, once the giveaway is over, the application will make a random selection of winners from among all the tickets distributed, so that the more tickets have been obtained the greater the chance of winning one of the prizes.

The deadline to participate in the giveaway will begin on April 5 and end on April 30.

You can read the general bases of our giveaways in the following link:

The winners will be announced on the following networks:


Disclaimer: The section “The Crypto of the month” should not be used as an investment advice, since the projects promoted in it are based exclusively on the criteria of the Crypto Economy team, we are not responsible for the use that is made of to the information shared.

0
It has been identified the first non-fungible token produced and distributed by a terrorist sympathizer following an unsuccessful attack last month on a Taliban...
Read more
- Advertisment -
Posting....
We use cookies to ensure that we give you the best experience on our website. If you continue to use this site we will assume that you are happy with it.OkPrivacy policy