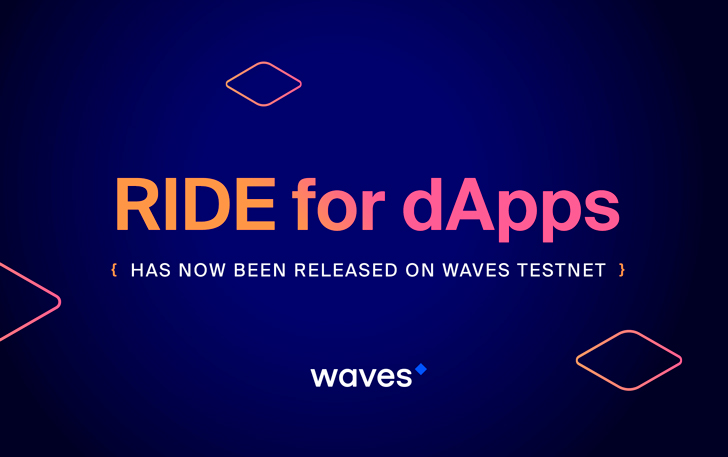 The Waves Platform, a decentralised blockchain ecosystem for building Web 3.0 solutions, releases an ultimate Node update 0.17 that brings RIDE for dApps to TestNet.

Initially, RIDE is a blockchain scripting language, which enables ‘smart’ blockchain transactions and is optimised to make best use of nodes’ computational resources. The execution result is predicated on certain logic, realised using RIDE scripts and deployed on the blockchain. It is strongly typed to protect developers from mistakes during the development process, potentially saving many hours of resolving bugs. The goal of RIDE’s architecture is to create a native on-chain computation layer which is as close to the general blockchain architecture (full data synchronisation) as possible. Complete documentation is available here.

After seeing the vulnerabilities and edge cases that have arisen on Ethereum, Waves has always maintained that Turing-completeness should not be essential for on-chain blockchain computations

The RIDE language itself is deliberately non-Turing complete for this reason. However, Turing complete computations can still be achieved by spreading operations over consecutive blocks, if such functionality is required. RIDE therefore offers a flexible but safe solution for on-blockchain computation.

Current RIDE for dApps update will let all developers create full-fledged Web 3.0 applications on the Waves blockchain. RIDE for dApps is being introduced to grant an account a way of assigning a programmable function to itself, with callable functions that are able to:

To initiate the call, the Waves development team has added a new command: InvokeScriptTransaction. This needs to be put on the blockchain to call a function, and the sender pays fees to the miner for the invocation to be executed. The sender can optionally attach payment in WAVES or tokens, and upon invocation the contract state can be changed and the contract can make multiple payments.

The existing mechanics for authorisation scripts will be maintained under the @Verifier function of the account. This can be thought of as an ‘admin’ function for the contract’s owner or owners. By default, the contract, contract data and contract tokens are all controlled by the private key for the account. Multisig control is possible too. If @Verifier is always false, then the contract is sealed.

Waves is a global blockchain platform launched in 2016. Waves’ mission is to build a blockchain ecosystem that allows users to address a wide range of real-world problems and build their own Web 3.0 solutions. The Waves team is creating a blockchain infrastructure with easy-to-use tools for individuals, developers and businesses. In April, 2017, Waves successfully launched its DEX (decentralised exchange), a fast and safe tool for trading the most popular cryptocurrencies. In late 2017 Waves-NG protocol was activated, enabling unprecedented throughput of up to 1,000 tx/s, whilst reducing transaction confirmation times to just seconds. As the first stage of Waves Turing complete Smart Contracts launch, in September, 2018, Smart Accounts became available on the Waves Platform followed by Smart Assets in January, 2019.