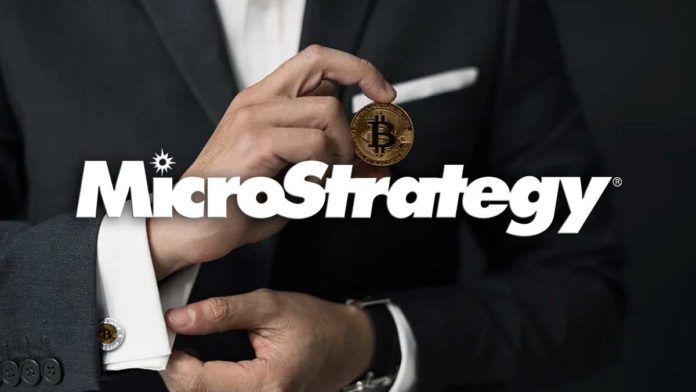 MicroStrategy has made its plan public to purchase more Bitcoin through proceeds of $400 million of senior secured notes that it is going to offer to institutional investors.

MicroStrategy, a NASDAQ-listed business intelligence firm and a Bitcoin whale, announced its plans in a press release on Monday, June 7th.

According to the announcement, MicroStrategy intends to offer a $400 million aggregate principal amount of senior secured notes in a private offering to qualified institutional buyers. The notes will be due in 2028.

MicroStrategy intends to use the net proceeds from the sale of the notes to make its sixth Bitcoin purchase in less than a year. Michael Saylor-led company also announced that it will form a subsidiary, MacroStrategy LLC, which will hold existing approximately 92,079 Bitcoin that it had acquired so far.

With the current amount of Bitcoin that MicroStrategy has, The worth of the company’s total bitcoin holding comes to around $3.037 billion at the current price. The announcement comes even as the company disclosed that it will take an impairment charge of nearly $285 million in its second quarter. The loss comes as a result of fluctuations in the price of Bitcoin. The charge will take place in the firm’s quarter ending June 30.

MicroStrategy is among one of the earliest corporate backers of the world’s largest cryptocurrency. The firm first invested over $450 million in Bitcoin in October of 2020. In December 2020, the company announced another Bitcoin purchase with more than $650 million in value. This purchase was powered by the sale of $400 Million of convertible notes.

In February 2021, a Virginia-based company conducted a second identical offering to raise funds for Bitcoin purchases. On 23 February, it invested $1.026 billion in Bitcoin. On March 1st, it revealed the purchase of 328 Bitcoin for about $15 million in cash at an average price of nearly $45,710 per BTC.

On May 13th, Microstrategy bought an additional 271 Bitcoins for $15 million in cash when Tesla’s announcement pulled the Bitcoin below $50,000. In total, the company holds 92,079 BTC as a store of value for a total of $2.251 billion at an average price of about $24,450 per coin. This means that MicroStrategy now counts more than $1 billion in profits on Bitcoin investment.

The recent announcement has come at a moment when Bitcoin is struggling to find support. Bitcoin price is $32,783 with a negative 9.52% change. What does this announcement brings to the Bitcoin and crypto market, only time will tell?