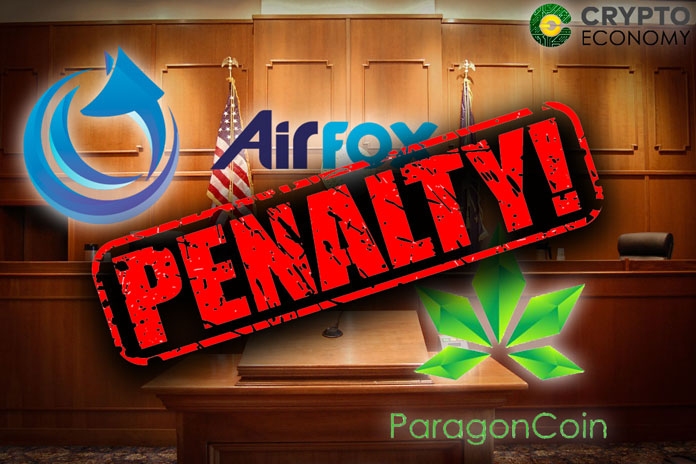 The Securities and Exchange Commission (SEC) yesterday through a press release published on their website announced that it had settled charges against two Ethereum-based blockchain project that had sold digital tokens to investors last year without complying with securities laws. The two companies had conducted Initial Coin Offerings (ICOs) to raise funds for their projects. ICOs are a way for blockchain projects to sell their native tokens for funds with the aim of using these funds to develop their products.

In the announcement, the two companies – CarrierEQ Inc. which had conducted an ICO for Airfox and Paragon Coin Inc. which had conducted an ICO with the same name – had agreed to pay fines totaling $250,000 for each. In addition, both companies had agreed to refund their investors for “harm” caused and file periodic reports with the SEC for at a year. Airfox ICO raised about $15 million worth of ETH while Paragon Coin raised $12 million in ETH value at the time that both ICOs were conducted.

This announcement comes barely a week after the SEC announced the settlement of similar charges with the founder of EtherDelta, a cryptocurrency exchange that offers services for Ethereum-based tokens. The first announcement was highly predicted to be a warning to most blockchain companies that the SEC was going after those operating without consideration of securities laws in the United States jurisdiction.

The SEC is hell-bent to ensure that investors are well protected in this emerging world of cryptocurrencies. Stephanie Avakian, one of the directors working with the commission’s Enforcement Division commented the following about the announcement:

“We have made it clear that companies that issue securities through ICOs are required to comply with existing statutes and rules governing the registration of securities. These cases tell those who are considering taking similar actions that we continue to be on the lookout for violations of the federal securities laws with respect to digital assets.”

Similar sentiments were expressed by Steven Peikin, another SEC director working alongside Avakian. Peikin said that:

“By providing investors who purchased securities in these ICOs with the opportunity to be reimbursed and having the issuers register their tokens with the SEC, these orders provide a model for companies that have issued tokens in ICOs and seek to comply with the federal securities laws.”

0
Harold Bosse, VP of new product development and innovation at Mastercard, believes that mass adoption of crypto based technology is not only imminent but...
Read more
Companies

0
One of the oldest banking institutions in Switzerland, Julius Baer, has just started offering crypto services including advice, trading and investing to its high-net-worth...
Read more
CryptoNews

0
In the aftermath of the crypto market crisis, European Central Bank President (ECB), Christine Lagarde, stated that cryptocurrencies are 'worth nothing' as there is...
Read more
CryptoNews

0
According to the Minister of Industry and Trade of the Russian Federation, Denis Manturov, cryptocurrency payments will be legalized in Russia 'sooner or later'. At...
Read more
- Advertisment -
Posting....