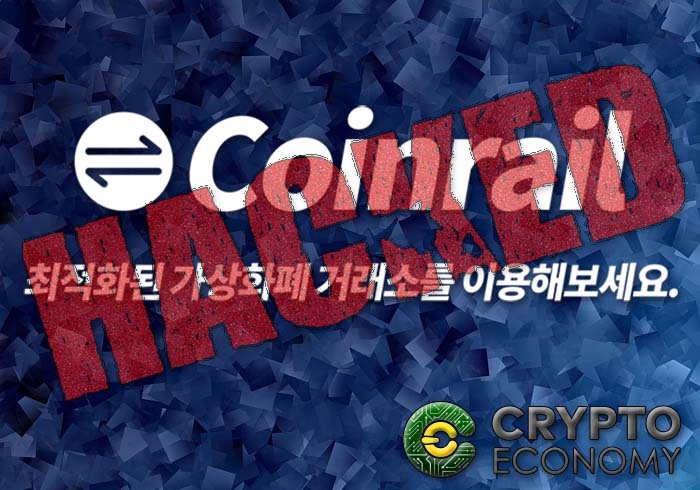 Coinrail, the Korean exchange, confirmed last Sunday, June 10, that it had suffered an attack where more than 40 million ERC20 tokens have been stolen. The affected cryptocurrencies, as indicated from the platform, have been: Pundi X (NPSX), NPER (NPER) and Aston (ATX).

As security measures until this is resolved, Coinrail has placed its exchange in maintenance and have frozen 70% of the total reserves of their wallets in cold wallets for their protection.

According to reports from Coinrail, the remaining 30% of cryptocurrencies are being analyzed through researchers, coin developers and exchanges.

On their Twitter account they kept all users of the platform informed about the actions taken and the progress made.

“We are checking the system for an attempted piracy that has been identified in the currency (Pundi X, NPXS) and are also are checking if there are damages in other currencies. We will give more details in the future. Confirmed some coins have been subtracted (Pundi X , NPXS) “

Other messages of interest sent from the official Twitter have been:

“The entire volume of stolen NPER (NPER) has been frozen. In cooperation with the NPER team the total amount has been recovered. CoPER rail NPER assets are safe.”

“We confirm that the subtracted Pundi X (NPXS) have been deposited in the IDEX exchange, and all of them were frozen in cooperation with the exchange. Please note that this amount is not available for transactions and transfers.”

“Immediately after confirming the Aston leak, we froze the total amount in cooperation with the Aston team.”

In the last message sent from the company, they indicate that with the cooperation of the research agency, other exchanges and coin developers, they managed to recover two thirds of the total amount of coins extracted.

In an article by Medium, Pundi X communicate the collaboration they are taking along with Coinrail to investigate the subtraction of cryptocurrencies, and report that the amount of Pundi X sent without permission to the IDEX platform amounts to 2,619,542,080 NPXS tokens.

They also reassure the owners of their tokens by ensuring that only the coinrail coins have been affected and the rest of the platforms is completely safe, and they add that Pundi X has not been hacked, only Coinrail.

Possible impact on the market

0
Function X, a new proof-of-stake (POS) public blockchain, developed by Pundi X Labs is nearing its mainnet launch as the team has done with the testnet and launched a staking pool.
Read more
Companies

0
From Venezuelan president Nicholas Maduro pushing for the massive adoption of cryptocurrency within his country, other stakeholders within Venezuelan are also stepping up. This...
Read more
CryptoCurrency News

The exchange Coinrail reopens after the hack

0
South Korean cryptocurrency exchange Coinrail, has decided to restart its services following a cyberattack suffered about a month ago, in which more than 40...
Read more
- Advertisment -