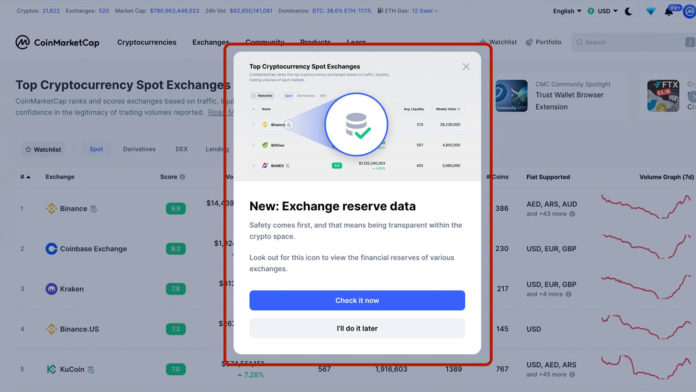 CoinMarketCap has announced that a proof-of-reserve tracker has been launched for the cryptocurrency exchanges, according to a new tweet.

This tool provides users with an easy way to keep track of exchange reserves by displaying a list of total assets and public wallet addresses of exchanges, along with the balance and value of each wallet displayed in the list.

It was today announced that the leading market researcher and tracker in the crypto industry has added a feature to its platform that will allow users to update their financial insights on an exchange-by-exchange basis.

An independent proof of reserves (PoR) tracker is used to audit the liquidity levels of cryptocurrency exchanges in a given period of time for transparency purposes. The announcement states that the tracker details the company’s total assets, as well as its associated public wallet addresses, along with their current value, balances, and current price, as well as the balances of the wallets listed on the tracker.

There is a report from CoinMarketCap that the PoR trackers will be updating data every five minutes. There was a guide posted to Twitter on Nov. 22 by the company that explained how to use the tool and how to navigate it.

Among the five Twitter threads at the time, Binance was used as an example with its combined wallet address containing over $65 billion, as an initial example.

It is important for exchanges to provide proof of reserves to their customers by providing the number of reserve assets that they have in place to cover possible withdrawals by their customers.

Proof-of-reserves is a method of verifying that a cryptocurrency exchange or wallet has the reserves it claims to have by checking the balances on the exchange or wallet. As a result, fraud is prevented as well as the personal information of the user is protected.

It is possible to prove reserves in a number of ways, but the most popular one is for an exchange or wallet to offer a cryptographic declaration confirming that the money it claims to own actually exists and that it is not just a fraud. This proof can be checked by anyone in order to ensure the exchange or wallet is not simply inventing numbers out of thin air.

In order for cryptos to develop into a more reliable and open ecosystem, proof of reserves should be adopted as the new benchmark in order to enhance trust in cryptos. There is however a need to wait and see if the new solutions will be able to contribute to making the ecosystem more transparent in the future.

Bitcoin has so far Outperformed Traditional Asset and Indices in 2020, Says CoinMarketCap Analysis