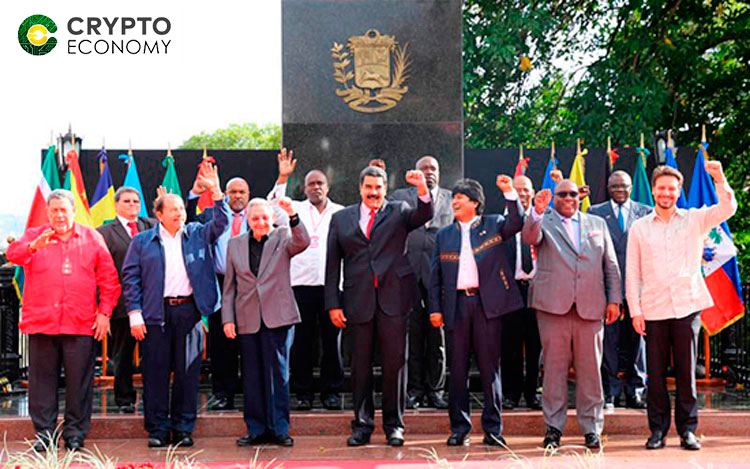 Venezuela’s polemic president, Nicolas Maduro, proposed this Friday all governments that are part of the Bolivarian Alliance for the Peoples of Our America (Alianza Bolivariana para los Pueblos de Nuestra America – ALBA for short) to join his cryptocurrency project, the Petro coin, which has been launched a couple of weeks ago.

According to a Venezuelan news media, during a meeting held with High Officials of governments – members of said regional organization – Maduro exhorted them to join the project, labeled as a “measure to boost economy.” He said “The world of cryptocurrency is our world, is the alternative world to break off the ‘financial blockade’ and to build economic and monetary solid foundations for the creation of a powerful intra-regional commerce.”

He also took the opportunity to condemn the “siege” USA’s government has against them. “It is a daily chase, there is no day they don’t shut down one of our foreign bank accounts and kidnap a significant amount of dollars in any of our accounts around the world,” he said.

The ALBA is integrated by Antigua and Barbuda, Bolivia, Cuba, Dominica, Ecuador, Nicaragua, Saint Lucia, St. Vincent and the Grenadines, Saint Kitts and Nevis, Grenada and Venezuela. Should they adopt the controversial cryptocurrency, it would make it the first digital coin issued by a government to be traded with, among several countries.

Last month, the Venezuelan Head of State announced the issuance of the Petro coin, a cryptocurrency that will initially be backed up by that country’s oil reserves – considered to be among the largest ones around the world – and later, by gold and diamonds. He assures that with it, some of the issues relating to the financial crisis the Caribbean country is currently undergoing will be solved, as well as to sort out “USA’s financial blockade” which, according to him, is the root of all its actual economic, political and social chaos. In a  recent note, it was announced the issuance of the first 100 million units of Petros.

In order to acquire some of these coins, people must register first in the Digital Mining Single Registry before January 21 of this year. Besides, the issuance, operation and use of this coin will be fully controlled by the controversial government, thus differing from the main feature of Bitcoin: decentralization.

This project has been met with negative feedback from analyst and people in general, stating that it is illegal because of compromising sovereign oil reserves, being this property of the State and as such, must be approved by the Parliament, which has just declared it “unconstitutional” and null.