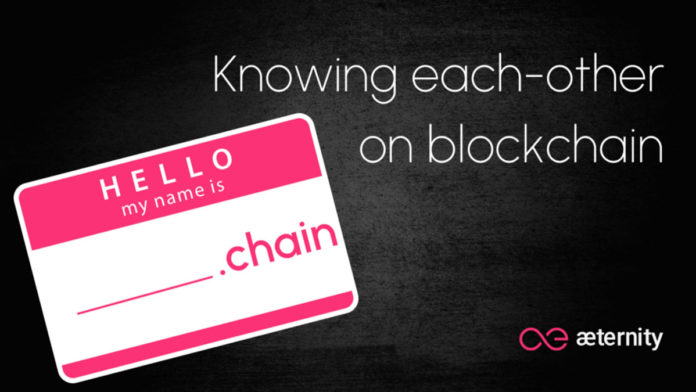 Aeternity published a blog post named “Knowing each other on blockchain” to describe the AENS naming service. The service helps blockchain users have social aspects in their interactions.

The ultimate goal of this service is to provide an easy-to-understand naming system that attracts more ordinary users to blockchain services.

The new solution from Aeternity may help a bigger group of people around the world come to the blockchain ecosystem and use it with fewer strugglings.

Blockchain technology ages more than a decade, but there are still lots of people around the world who don’t fully understand it. It can be considered as one of the biggest revolutionary technologies of the 21st century.

But it still needs lots of improvements and tools to become understandable for ordinary people. Some experts believe even the developers in the blockchain world still have problems understanding all of the aspects. Many of them are focusing on the infrastructures of blockchains. But lots of effort is needed to make the technology more user-friendly. It’s where the solutions like AENS from Aeternity come to action.

Aeternity Blockchain is one of the most active projects focused on user-friendly features. It has many features like state channels, embedded oracles, smart contract language (Sophia), and virtual machine (FATE) that all are aimed to help mainstream users benefit from the blockchain solutions easier.

The naming system called AENS (æternity Naming System) is one of the most important ones that help users interact easier with blockchain tools. AENS lets Aeternity users use names instead of long addresses in applications. Human-readable names can be used on various occasions like accounts, smart contracts, oracle, and etc. Aternity gives an example of using AENS for users in the latest post:

As you can see in the example, one of the best benefits of AENS is reducing errors while saving or sending wallet addresses. In simple terms, you can more easily memorize a human-readable name instead of a long address.

Besides, when you give new users names and simple addresses for interacting with the blockchain, they will like to work with it more that can ultimately help the overall ecosystem.

0
Telangana Blockchain District in India is one of the major startup hubs in the country missioned to invest and grow a startup in the...
Read more
CryptoCurrency News

0
StarfleetIndia's demo day will hold on May 8th by AE Ventures and IBC Media. The event is the culmination of the æternity Starfleet Acceleration...
Read more
Companies

0
WeTrue is a decentralized app project within Aeternity blockchain that is focused on Chinese users. Liu Shao is the developer of WeTrue, who had...
Read more
CryptoCurrency News

Coinmarketcap Chose aenalytics as the Explorer for aeternity

0
CoinMarketCap, the leading platform for providing market data on cryptocurrencies, listed ænalytics as the explorer for æternity. CoinMarketCap that is now an asset of Binance...
Read more
Companies

0
Aeternity blockchain meetup is the latest to go virtual due to concerns about coronavirus pandemic. The meetup was supposed to be held in Bogota...
Read more
- Advertisment -
Posting....
We use cookies to ensure that we give you the best experience on our website. If you continue to use this site we will assume that you are happy with it.OkPrivacy policy