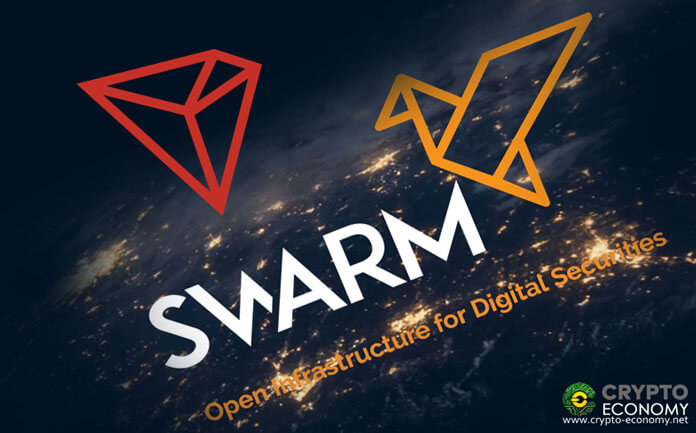 The partnership between TRON and Swarm is among the most recent collaborations set up by TRON Foundation. This merger shows just how committed the TRON Foundation is towards innovation and the token’s mass adoption. The main aim towards Swarm and TRON collaboration is so that Swarm could bring its security tokens to TRON’s platform, as well as allow users to complete transactions with zero fees.

According to a statement made by the Co-founder and CEO of Swarm, Phillip Pieper;

“TRON’s dedication to delivering fast, free solutions using decentralized infrastructure make them a natural fit for Swarm’s open tokenization technology. Issuers will be able to offer security tokens on TRON’s blockchain, and will allow investors to use TRX and USDT-TRON to purchase security tokens. This is about meeting people where they are, and opening the door for the massive and engaged TRON community to enter this rapidly growing space.”

As reported by the TRON blog on Medium, Swarm is “a blockchain technology company which provides fee-free tokenization of assets which pay dividends, will allow asset providers with proper licensing and KYC measures to issue security tokens on the TRON blockchain.’’

Justin Sun, TRON’s founder and CEO of BitTorrent believes that Swarm is among the biggest creators of digital investment infrastructure. Sun is positive that the merger will aid decentralized finance and create the right tools to help capture value across various assets and frameworks.

“Swarm is one of the preeminent builders of digital investment infrastructure and its decision to adopt the TRON blockchain will further our push to make decentralized finance the next big thing for the investment community,” said Justin Sun.

Tether the last ally of TRON

USDT-TRON is a Stablecoin based on the Tether technology in partnership with Bitfinex, a well known cryptocurrency exchange platform that provides advanced services to digital currency traders and liquidity providers. The TRON based USDT is pegged to the U.S. Dollar and hence it can be used in smart contracts for security tokens that offer a dividend to the holders of their respective security tokens.

Currently, Tether’s USDT is the most valued Stablecoin in the crypto ecosystem which also happens to be the only Stablecoin that has hit top 10 according to coin market cap.

0
Algorand Inc., the company behind Algorand Blockchain protocol, has announced a new Blockchain-based initiative in collaboration with PlanetWatch to combat air pollution. In a press...
Read more
Reviews

0
The cryptocurrency sector is constantly growing and evolving, in addition to the growing interest of people in the blockchain and the economic revolution that...
Read more
Companies

0
Law enforcement authorities in Tokyo have arrested two person accused of stealing bitcoin worth a total of around 78 million yen from the trading...
Read more
Economy

0
If you think that digital currencies are a passing fad, then you have another thing coming because now various governments are about to join...
Read more
- Advertisment -
We use cookies to ensure that we give you the best experience on our website. If you continue to use this site we will assume that you are happy with it.OkPrivacy policy