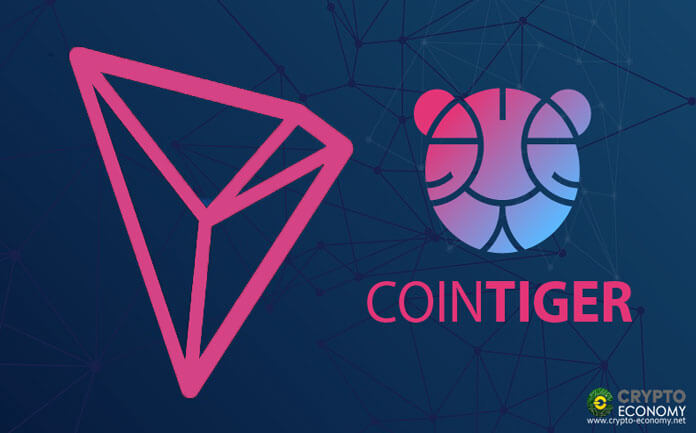 The partnership between TRON and CoinTiger is the latest news from the TRON Foundation. Apparently, the partnership also entailed a TRX and BitTorrent (BTT) giveaway that amounted to a total of 1 million and 3 million TRX and BTT tokens respectively.

“The world’s first #TRX trading market will be launched on @CoinTigerEx, The initial trading pairs under the market will be ETH/TRX, XRP/TRX, EOS/TRX, LTC. /TRX, XLM/TRX, BTT/TRX, the $TRX market will be available at 16:00, Apr 9, 2019 (SGT). Happy trading. #TRON #BTT $BTT”

For TRON, the major push towards this merger is to get more people into the ecosystem, -this was proven when the platform stated that based on withdrawals and deposits, the top 50 traders would share a pool of 800,000 TRX in addition to 1 million BTT.

Top 51 and below would share a prize pool of 200,000 TRX and 1 million BTT. The rewards rise depending on the trading volumes. These rewards will however be issued a week after the competition ends.

The programme begun yesterday at 16:00 (UTC+8) and took place as follows;

Despite the fact that the crypto market is still quite bear, TRON is doing its best to not only stay afloat but also keep expanding. Buying out BitTorrent to implement blockchain is just one of its expansion schemes.

Just the other day, Justin Sun released an announcement detailing TRON’s future plans. One major upgrade he mentioned is the release of the Sun Network, TRON’s layer 2 solution. Again, Justin Sun was quite clear that the platform’s main aim is to attract more users.

Yesterday, Sun posted a tweet announcing the release date of the Sun Network. According to his tweet, the launch is set to take place on the 30th of May this year. The Sun Network aims to improve not just the scalability but also the transaction capacity of TRON Foundation