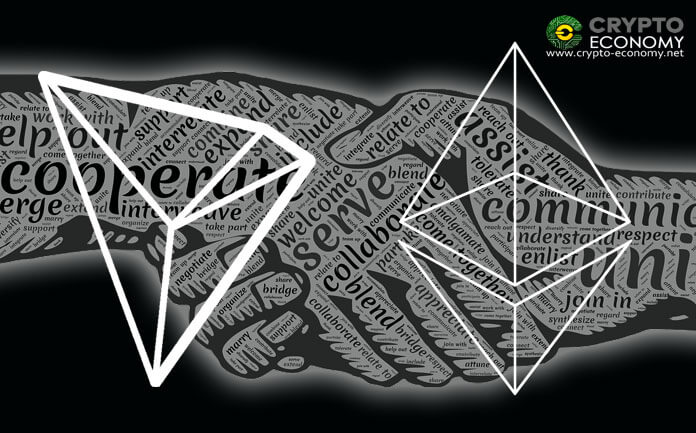 Crypto wunderkind Justin Sun, the founder and CEO of platform Tron and CEO of file-sharing platform BitTorrent, who was hosted on the CryptoChick podcast this weekend said that Tron would be collaborating “officially” with competing smart contract platform Ethereum on a future project as soon as later this year. This statement comes as a shocker given that Sun and fellow wunderkind creator of Ethereum Vitalik Buterin have had public spats over whose platform is superior over the others.

Their public feud is well documented in Twitter and other social media platforms, so when asked about his comments on a recent jab at the Tron founder by Buterin, it came to as a surprise that Sun thinks that competition between the two platforms is healthy.

“First of all, everybody knows that Tron and Ethereum compete in the Dapp [sector], for sure. But I think definitely that this competition will result in a better product – the competition between Ethereum and Tron benefits the whole industry,” he said.

The jab in question involves a tweet by Buterin in which he shared a picture of him standing in front of a poster of Justin Sun. Buterin captioned the picture, “Toward a brighter tomorrow.” Assumedly the tweet was made sarcastically by Buterin in continuation of the two gentlemen’s feud.

Toward a brighter tomorrow. pic.twitter.com/7FAWC7TS8z

However, Sun replied on the podcast that the idea of collaboration couldn’t be far-fetched.

“In terms of the comments he made recently, and the picture: Right now, I’m actually into love – the true love, and the brotherhood of the industry. So I think that in the future we will even collaborate with lots of the Ethereum developers, and also the enterprises built on Ethereum before if we make the industry better.”

Upon further probing by Rachel Wolfson, the podcast host, Sun admitted that he is optimistic that an official collaboration between the two platforms could be realized within the year. He said,

“I think that even within this year we will see Tron officially collaborate with Ethereum, and will be something good for the industry.”

During the podcast, Sun also noted two other major developments within his network. First, the launch of the Tron-based Tether stablecoin which is scheduled to launch this week on April 9th and the launch of a “new network with a privacy option,” which will be designed based on zkSnarks technology, popularized by popular privacy-focused altcoin Zcash.