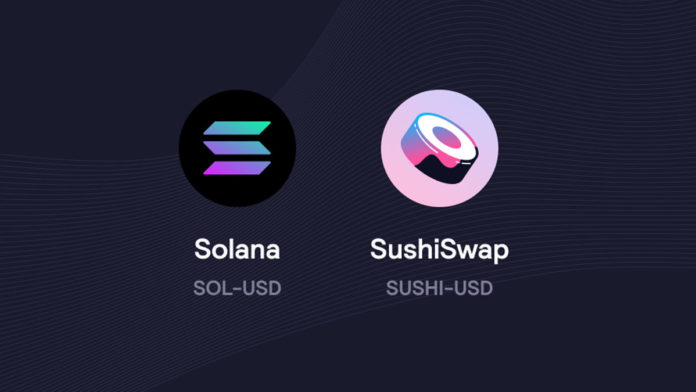 dYdX announced new trading pairs on its decentralized exchange. SOL-USD and SUSHI-USD pairs are now available for DEX’s users. The addition of Solana and SushiSwap tokens is part of a pre-announced plan in dYdX that aims to support more tokens and projects in the platform. The new pairs are now available to all users out of the United States. New markets will be added soon to dYdX, according to the latest announcement.

Decentralized exchanges are the answer to the traditional challenges of crypto-trading. They try to remove the worries about censorship and limits that a centralized exchange may bring to the ecosystem. But many of them lack the support for tokens while trying their best to add as many projects as possible. It’s the reason that DEXs are always partnering with innovative blockchain projects to support new tokens and trading pairs. dYdX is one of the most active ones in this scene that announced two new supported projects, Solana and SushiSwap.

Solana and SushiSwap are among the most popular projects in the blockchain world. Each of them focuses on a particular problem to solve and has been successful in creating a significant user base. When exchanges support these projects and their native tokens, we can expect a considerable rise in trading volume in them. It’s the reason dYdX has chosen SOL and SUSHI as two of the first additions to a yearly plan. The DEX plans to launch more markets in the coming months.

As mentioned above, SOL-USD and SUSHI-USD are two new markets to dYdX decentralized exchange. Each of them is added with a dedicated spec that you can see in the announcement post. The specs are almost similar for both tokens. Regarding the funding, dYdX explains:

“Funding payments are credited or debited at the start of each hour and are included in the realized PnL for the position. The funding premium is scaled so as to have a realization period of 8 hours (8-hour funding rate).”

dYdX is one of the many smart contract-based exchanges on Ethereum. The platform aims to support famous tokens as well as innovative newbies to expand market share in competition with giants like Uniswap and SushiSwap.

0
Solana prices are relatively stable from the candlestick arrangement in the daily chart. Following sharp losses on August 19 and subsequent confirmation on August 26,...
Read more
Companies

0
Renowned decentralized cryptocurrency exchange dYdX has ended its latest $25 deposit promotion after severe backlash from consumers. Through this promotion, users were required to...
Read more
CryptoNews

0
The global crypto market cap was threatened with a drop below the $1 trillion mark again as it was trading at $1.01 trillion. Bitcoin...
Read more
- Advertisment -
Posting....
We use cookies to ensure that we give you the best experience on our website. If you continue to use this site we will assume that you are happy with it.OkPrivacy policy