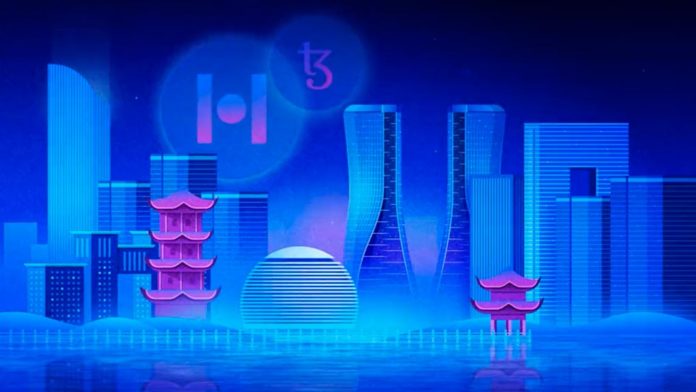 Tezos’ 8th protocol upgrade Hangzhou is underway as the proposal for the upgrade has been announced by the Global Tezos community.

In a blog post on Tuesday, September 21, the Tezos team said that the Hangzhou proposal features several major improvements to the protocol, as well as numerous minor improvements. These improvements include timelock, views, cache, global table of constants, context, and liquidity baking.

According to a separate blog post explaining the Tezos’ 8th protocol upgrade by Nomadic Labs, Marigold, Oxhead Alpha, Tarides, and DaiLambda, the teams who developed the proposal, Hangzhou true name is its hash, which is

The upgrade is named after the capital of East China’s Zhejiang province, Hangzhou. This name is given to the upgrade because it has now become a dynamic economic zone, and is considered a major technological and innovation hub.

Some of the major improvements that this upgrade will bring to Tezos protocol include:

Timelock is a kind of encryption that will allow a smart contract to include a countermeasure against Block Producer Extractable Value.

According to the teams, adding cache feature will directly increase the throughput of Tezos by providing faster access to regularly accessed data and will lower the associated gas cost.

Context flattening is the rewriting of the network’s database internals that will optimize storage use, and enable future optimizations to speed up the processing of blocks and operations.

According to the blog post, liquidity baking “extends the sunset period of liquidity baking to correspond to the next upgrade proposal. Without this, the subsidy would halt during the lifespan of this protocol.”

Tezos’ 8th protocol upgrade will also have many other minor improvements.

No other blockchain has upgraded as many times as Tezos. Hangzhou is the fourth Tezos protocol in 2021, following Edo, Florence, and Granada. If the Hangzhou upgrade proposal is adopted, it will follow the 7th Granada upgrade that went live on August 6th, 2021.

When Hangzhou will go live, it will set the stage for the next upgrade that is reported to introduce a new consensus algorithm that will bring fast finality to Tezos.

0
Input Output Global (IOG), the blockchain company behind Cardano (ADA), has reinforced its comittment to focus on fervent academic research by collaborating with one...
Read more
Companies