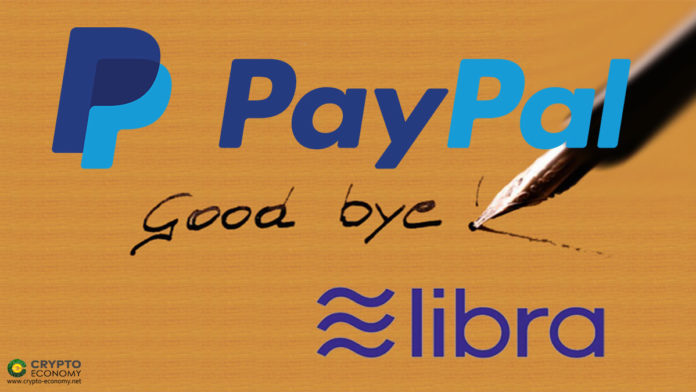 PayPal has become the first company to walk away officially from Facebook’s Libra. Crypto-economy reported on October 2 that four consortium payment service partners that sponsor the Facebook project could retire their support for the Libra cryptocurrency project. Now PayPal has officially announced its separation from the project.

PayPal did not attend a meeting of 28 Libra backers on Thursday. An official from the firm, said that PayPal has decided to left Libra Association. The official from PayPal added:

“We remain supportive of Libra’s aspirations and look forward to continued dialogue on ways to work together in the future. Facebook has been a longstanding and valued strategic partner to PayPal, and we will continue to partner with and support Facebook in various capacities.”

A person close to PayPal said that Facebook didn’t do much with regulatory concerns that the company (PayPal) does not want regulators to interfere in its business.

Backing out of such key partner from the project before it’s even gotten off the ground is a big blow to Facebook and the Libra Association which is already facing very tight regulatory scrutiny. In Europe also, many developed countries like France and Germany showed a negative response towards Libra.

Facebook and other members of Libra Association are due to meet in Geneva, Switzerland, on October 14, 2019. In the meeting, representatives from the member companies will appoint a board of directors for the Libra Association but things have already gotten worse for the project. According to some reports, regulators has started to spook some who have only nominally backed the project at this point.

The Libra Association is a group of more than two dozen companies overseeing this cryptocurrency project announced by Facebook earlier this year. Facebook doesn’t control the Libra organization or currency, but gets a single vote alongside the remaining partners. Each member will invest at least $10 million in the project and Libra Association will promote an open-sourced Libra Blockchain.

In response to these high pressure conditions, the CEO of Facebook Mark Zuckerberg, said that the company could delay the launch of its project.