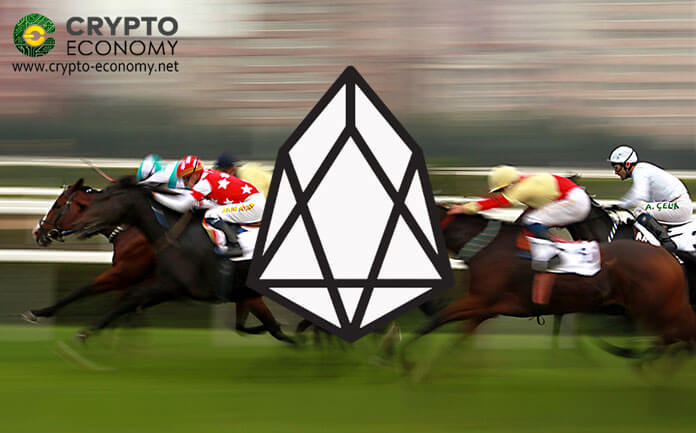 After weeks of constant market cap reshuffling, EOS has finally landed on the 4th spot of the most valuable cryptocurrencies by market capitalization behind Bitcoin, Ethereum and Ripple.

EOS edged out Litecoin which has only lasted 6 days on the 4th position. Between yesterday’s lows of $2.74 and today’s highs of $2.99, the coin has gained more than 9%, the biggest gains among the top ten coins. Its market cap also saw a noticeable rise from $2.48B to $2.7B. The coin is currently priced at $2.85 on the Coinmarketcap index.

In comparison, Litecoin is currently priced at $41.65 against the US Dollar with a market cap of $2.6B, a difference of only $21M at press time. Litecoin, which opened last week at the 7th position, made some impressive gains on February 8th jumping more than 30% in 24hours to surpass EOS, Bitcoin Cash and Tether stablecoin.

Litecoin’s previous rally was due to fundamental developments when the Litecoin Foundation announced a partnership with Beam Privacy to implement privacy features to the popular altcoin and also introduce fungibility to the coins.The EOS rally can, however, be attributed to technical factors as opposed to Litecoin’s fundamentals because EOS has not implemented any news-worthy features lately.

Last month, EOS took a nose-dive shedding as much as 24% off its price between January 10th and 14th. At the time, the EOS price fell from $2.95 to $2.25. By the of the month, the coin was competing head to head in terms of market capitalization with Bitcoin Cash which has been losing value at a faster rate than any other coin on the top ten list.

A pseudonymous cryptocurrency technical analyst by the name DonAlt on Twitter wrote on February 11th that,

“EOS is back at the level it was before BTC broke 6k. (!) Showing exceptional strength. A bit more confirmation and I’ll jump in.”

Also, earlier this month, the independent U.S.-based provider of cryptocurrencies, stocks, and mutual funds ratings agency Weiss Ratings expressed some positive sentiments towards EOS by writing on Twitter that,

“EOS has a DApp called Dice, and it’s beating another DApp, TronBet by about 60% in volume and 30% in transactions. People shilling TRON need to understand that EOS is still way ahead.”

Other reports have shown that EOS and Tron dApps have eclipsed Ethereum’s dApps on the top 50 rankings which may have been translated by some as positive news.