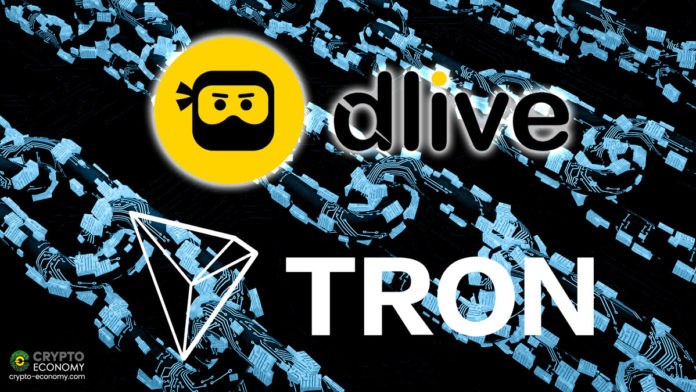 From April 15, DLive will using Tron Blockchain and from April 23rd, LINO Staking Rewards will be replaced with BTT Staking rewards on DLive.

As Crypto Economy reported, on December 29, 2019, Tron announced the acquisition of DLive to integrate it into BitTorrent, a decentralized media sharing company acquired by Tron in 2018. So it was obvious that DLive would migrate from its former Lino Network developed by the ACE Protocol foundation over to the Tron blockchain. Now the migration to the TRON blockchain is complete.

Being a member of BitTorrent family, Lino staking rewards will also be replaced by with BTT Staking rewards on DLive. The announcement further reads:

“BTT Staking Rewards will only be available through DLive, strengthening the partnership via DLive and BitTorrent. Staking Rewards will also be increased from 9.9% to 25% to further encourage and reward those who join DLive and support the new DLive & BTT economic system. This will make the new ecosystem more sustainable economically in the long run and further prevent fraud and abuse.”

It seems Tron Network is focussing more and more on its entertainment strategy. As reported earlier, a gaming reward platform Refereum has aslp teamed up with Tron, DLive, and Bittorrent to rewards DLive users with RFR and Steam digital keys for various games.

On Valentine day, February 14, 2020, Tron also acquired the popular crypto-blogging platform Steemit which will also be moved to Tron Blockchain after a good race on its own Steem blockchain platform although, at that time, Justin Sun said that that the integration of Tron with Steem won’t be immediate.

Justin Sun, talking about the integration of Steemit to Tron, said:

“I don’t think we have a plan for immediately like token swap, so I think we will keep both Steem and the Tron tokens separate and run separately … there is no token swap for right now … I just want to talk with the team and found out the best solution to integrate eventually for Steem, Steemit, and Tron.”