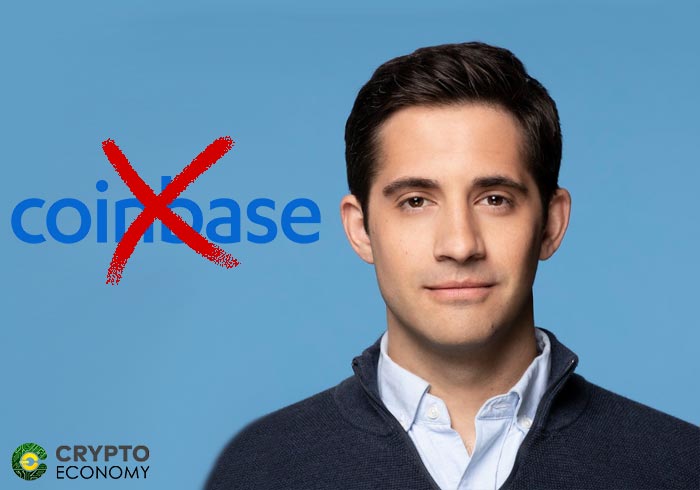 Dan Romero, Coinbase’s head of institutional and international businesses will be departing from the popular cryptocurrency exchange at the end of this month in pursuit of new opportunities. Romero’s exit will mark the exit of four high ranking executives all associated with Coinbase’s institutional division.

Coinbase initially announced the launch of the institutional division back in March 2018 to target Wall Street clients seeking to join the cryptocurrency industry. However, following the bite of the crypto winter towards the end of the year last year, Coinbase revised its strategy and decided to shelf its plans to cater to the Wall Street institutions.

This means that all team members in this institutional division became obsolete for the most part and some of these have opted to jump ship of resign all together.

Starting out in October 2018, Adam White, the former head and founding member of the institutional division left to co-found the ICE-backed Bitcoin futures exchange platform Bakkt. Adam had been one of the earliest employees of Coinbase, joining the company as the fifth employee back in 2013. Following White’s departure, Hunter Merghart, a former Wall Street trader and in charge of Coinbase’s trading left soon thereafter.

Romero’s exit announcement comes just days after another former Coinbase executive, Christine Sandler chose to jump ship over to Fidelity Investment’s newly formed cryptocurrency division Digital Assets (FDAS). Sandler was in charge of Coinbase’s institutional sales and will be in charge of FDAS’s sales and marketing.

In his exit announcement, Romero revealed that he had worked with Coinbase for more than 5 years, joining the firm back when there were only 20 team members. Looking at his LinkedIn profile, it says that Romero joined the firm in August 2014. As one of the longest-serving employees in Coinbase, Romero has had the chance to wear several hats over the years. He said:

“I’ve also had the privilege to work across almost every aspect of the Coinbase business— our banking partnerships, international, and time with both our consumer and institutional businesses. Through this, I’ve come to appreciate the value in working at a mission-driven company that’s willing to focus on a long-term strategy.”

According to a statement by Coinbase’s spokesperson Elliott Suthers, Romero’s responsibilities will be assigned to two individuals. M&A lead Emilie Choi will take over the international businesses and the OTC division while Jim Migdal will be responsible for the (remaining) sales team.

Ethereum 2.0 Will Start Its Rollout at Noon on December 1, Exchanges Announce ETH 2 Support

0
Ethereum 2.0 will start its rollout at noon on December 1. Today, at 12:00 PM UTC, Phase 0 will launch the beacon chain that will start the transformation from prooF-of-work (PoW) to Proof-of-Stake (PoS) consensus. This beacon chain will run alongside the original PoW chain.
Read more
CryptoCurrency News

0
on Thursday, Coinbase management shared an internal email with the community that they sent to their employees about an upcoming story in the New York Times. The email reveals that the New York Times is going to publish a negative story about the exchange in the coming few days.
Read more
CryptoNews

0
During a recent business conference, the CEO of the largest banking conglomerate in the world described his experience and view on Bitcoin. As reported...
Read more
- Advertisment -