And Bitcoin Gold has arrived

The debate over Bitcoin’s climb is far from calming down, and less so when a new bifurcation has already materialized, as Bitcoin Gold. We have seen the most intense discussions regarding Bitcoin’s scalability in 2017. Throughout the year, buyers, builders and miners engaged in a hard and important debate on how to scale Bitcoin to address the growing buyer and transaction base volume. On August 1, 2017, new protocols requiring a “hard fork” were adopted. The result was a division of the network into two entities; the standard bitcoin cryptocurrency – BTC – and bitcoin cash – BCH.

Now, we have a new division. After the height of block 491407, the Bitcoin blockchain underwent a hard fork, and once again gave birth to a new digital currency called Bitcoin Gold (BTG).

We have already explained what Bitcoin Gold is (see here Bitcoin Gold: the new hardfork of bitcoin)

The BTG project has gained great popularity in social networks and Slack and the BTG team have already made the code available to the public for review. The full launch of the BTG network is scheduled for November 1, when bitcoin owners will receive the BTG tokens.

Now, the controversy continues. While many shout that this is an attack on Bitcoin and is a definite scam, there is still much discussion in the way of another hard fork. Although plans for this new division were introduced in July, many enthusiasts within the Bitcoin community are still not fully aware of the project and the implications it might have. There are many who consider that the second fork is an attempt to troll the previous hard fork and the adoption of SegWit2x. But the truth is that it is already concrete and things are moving.

The distribution of the new token will work exactly as it did with the Bitcoin Cash division. Bitcoin owners who want to access these new tokens should make sure they have full access to their private keys. Any bitcoin owner depending on their wallet will receive an equal amount of BTG. For example, if a holder owns 10 bitcoins in his wallet, then he will be entitled to the same exact amount in BTG. However, there is still much debate over the distribution of BTG tokens. 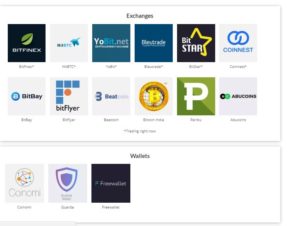 Bitfinex has already credited its users with BTG, but it seems that at least some operators with margins in bitcoin now have a negative BTG balance. Trezor also launched an ad Oct. 23 saying it would admit Bitcoin Gold, but Trezor wallet will wait for proper playback protection, which means that if you want to keep both BTC and BTG no further action is required.

Others will not support the altcoin at all, like Coinbase, Kraken and ShapeShift. Any secure Bitcoin wallet that gives the user exclusive control of private cryptographic keys before the October 24 bifurcator will allow you to claim Bitcoin Gold.

Some wallets may offer you direct access to your BTG, while others may require you to take additional technical steps. For example, Coinomi wallet will allow you to import your private keys from a bitcoin address and place them in the Coinomi wallet for BTG (you should only do this after you send bitcoin to another address).

Verified wallets that support BTC and BTG side by side will appear on the Bitcoin Gold home page.