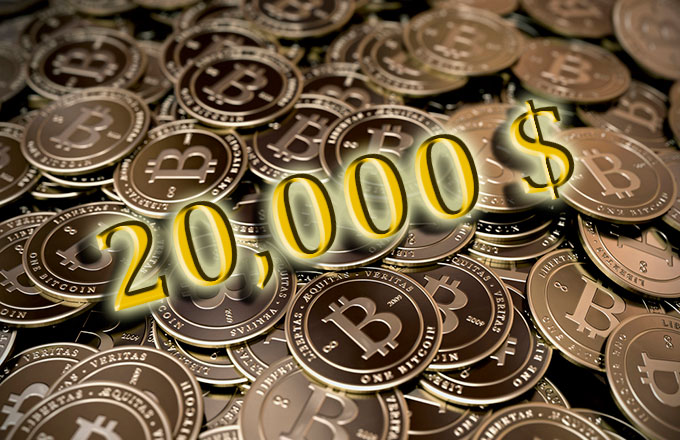 As if the milestone it represented hitting the All-Time High of $ 10,000 wasn’t enough, Bitcoin has just reached another breakthrough this Sunday, when pierced its next big barrier: the USD/BTC exchange rate of $ 20,000.

According to data collected from CoinMarketCap, world’s largest cryptocurrency in terms of market capitalization found itself in a bull rush to said ceiling, breaking through it and touching the $ 20,089 price mark at 12:19 UTC of this December 17. It also reached a market cap of 336 bln dollars and a transaction volume of $ 15 bln in last 24 hours.

Bitcoin futures market – a key factor in its last push up

Satoshi’s coin has had a tremendous growth this year, starting from roughly $ 1,000 per coin, having a slow climbing the first four months, then hitting up the turbo button and showing a quicker rush that found more fuel than obstacles in its way. But two key factors – Bitcoin futures market announcement and their posterior launching – were mostly responsible for driving the cryptocoin upwards at full force, outperforming expectations from almost everyone and gaining trust from more and more people, thus becoming more mainstream in the process.

This has proven to be true, with the hype generated by CME’s previous announcement of a bitcoin futures market scheduled for today, and market movements observed within the first week of CBOE’s own futures contract kick-off (which began operating last December 10), having an impact on BTC price.

However, it is worth noting that, after the rally it took to said milestone and the hype around CME’s futures launch, it didn’t maintained its momentum, dipping shortly after. Charts show that it went as low as $ 18,355 in its price at 01:39 UTC, although globally, it kept trading at premium prices thanks to movements in Asian exchanges like Bithumb and bitFlyer.

Nevertheless, the BTC market is showing signs of exhaustion with numbers going slowly down, possibly due to some whales taking short position, then pumping up its price by buying more bitcoins and then selling them off to prompt a dip in its value, profiting from these fluctuations.