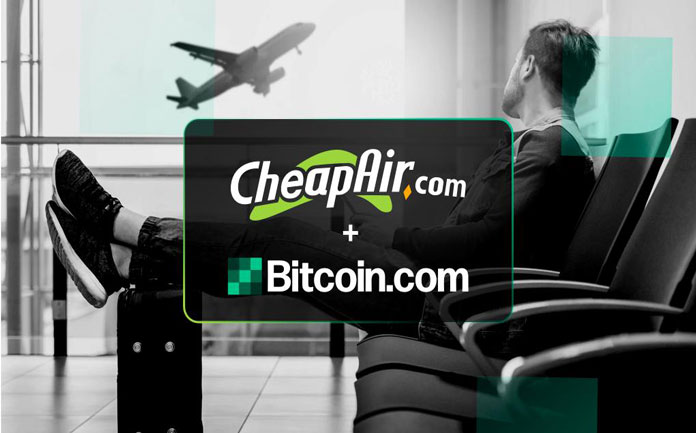 CheapAir.com, a popular online travel agency has announced a partnership with Bitcoin fork Bitcoin Cash’s lead maintainer Bitcoin.com. The partnership will enable more than 4 million individuals that already use the Bitcoin.com wallet to directly access CheapAir.com service on their mobile phones. CheapAir.com made the announcement on Wednesday, July 31st stating that this “partnership will help crypto travelers find the best deals on flights and hotels around the world.”

CheapAir.com was the first US online travel agency, back in 2013, to accept cryptocurrency from its users for payments. It naturally started with Bitcoin but has since increased its options allowing crypto lovers to pay in other coins including Ethereum [ETH], Litecoin [LTC], Bitcoin Cash [BCH] and Dash.

Now, part of the partnership with Bitcoin.com will also include a special perk to users. Travelers who make their payments through cryptocurrencies, their travel payments will be covered by Price Drop Payback™ which means that if between their date of payment and their travel date, the price of their ticket drops, the difference (loss) will be recovered to the tune of $100 and credited to their CheapAir.com in travel credit.

“At CheapAir.com we’re big fans of Bitcoin and we believe people deserve the freedom to use whatever payment methods that fit their lifestyle and values,” spoke CheapAir.com CEO Jeff Klee adding that “We wanted to partner with Bitcoin.com because of the great work they have done within the Bitcoin community, promoting crypto acceptance around the world. We value our crypto customers and support their efforts to build a more diverse and evolved financial system.”

CheapAir.com is revolutionizing the industry. Using AI, the company seeks to provide data tools that will help its users search and find some of the cheapest times to make a flight. According to the announcement, the company has released its fifth annual airfare study that details some of the latest trends in air travel highlighting some of the best times to travel across the year. Such data comes in handy, especially for frequent travelers. With the added insurance of price drop payback, travelers have a reason to book their tickets in time following the CheapAir.com data.

“Bitcoin.com is really excited to spread real-world BCH adoption with [CheapAir.com]. Paying for flights and hotels with Bitcoin Cash has never been easier,” said CEO of Bitcoin.com Stefan Rust.