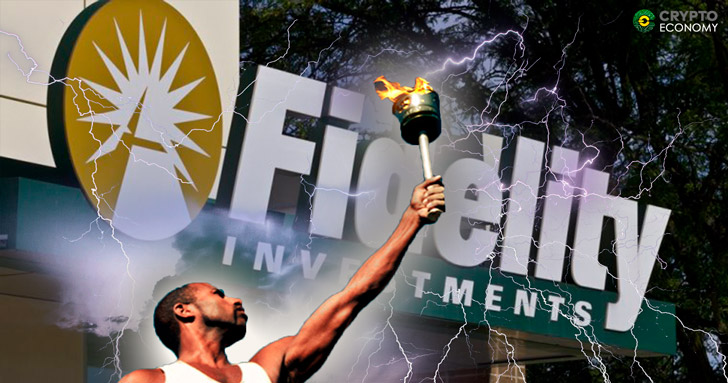 Financial derivatives giant Fidelity Investments through its Digital assets arm Fidelity Digital Assets received the Bitcoin Lighting torch on February 23rd, which is an experiment by Bitcoin enthusiasts to see how many people will take part in the torch-bearing exercise. Started by pseudonymous Twitter user ‘@Hodlonaut’ on January 19th, the Bitcoin Lightning torch experiment is an exercise in which the participants receive a Bitcoin payment through the Lightning network and pass it on to the next trusted Twitter user after topping up with some satoshis. Fidelity Digital Assets received the ‘torch’ from Twitter user ‘@Wiz’ after preparing a 3.64 million satoshis invoice to the user.

Fidelity requested the torch through a tweet to @Wiz on February 23rd that read:

We’d be honored if you would pass the #LNTorch to our research arm, Fidelity Center for Applied Tech. We are ready with an invoice for 3.64M sats #LNTrustChain #LightningTorch ⚡

A few moments later Fidelity was the proud bearer of the Lightning torch. @Wiz tweeted his handover transaction to Fidelity saying sarcastically

They’re launching a new institutional Bitcoin custody service, and the #LNTrustChain worth ₿0.0364 is their first Lightning transaction! ⚡️??

They can add that to their ~$2.5T of assets under management ?

Fidelity replied as well admitting to receiving the torch:

We and our research team at the Fidelity Center for Applied Technology have received the #LNTorch ⚡from @Wiz. Who should we pass it to?

To answer that question, Harvard’s Blockchain School and Crypto Club tweeted requesting the torch. They wrote:

Hi Fidelity Digital! For our #HBSCryptoConference tomorrow we would be honored to carry the Lightning Torch #LNTorch. We are ready with an invoice for 3.65M satoshis

We have selected @HBSCryptoClub to receive the #LightningTorch, as they continue to enable #bitcoin research and development

The Harvard School Blockchain & Crypto Club replied with their invoice for 3.65 million sats and were immediately sent the ‘torch’.

We’ve passed the Lightning Torch ⚡ to @HBSCryptoClub late on a Friday night, on the eve of their 2nd annual Blockchain Summit, because we know #cryptoneversleeps. Keep up the good work in the academic community

Fidelity tweeted after sending the torch. However, more than 24 hours later since receiving the torch, the Harvard School Blockchain & Crypto Club has not passed on the torch and has remained silent ever since they received it prompting several Twitter users to lash out at them for breaking the Lighting etiquette. @Hodlonaut tweeted saying :

Disappointed in @HBSCryptoClub. 24 hours since they got the torch, still not passed on and not even a word. Many awesome peeps like @real_vijay and @Ziya_Sadr who have sent invoices are being ignored. Breach of torch etiquette

The torch has been passed on to some noteworthy individuals including Twitter CEO Jack Dorsey, early Bitcoin adopter Charlie Shrem and Binance CEO CZ. More than 220 individuals and entities have taken part in this experiment that is proving to be a wild success and unmistakably popularizing the less known Bitcoin scaling solution Lightning Network.