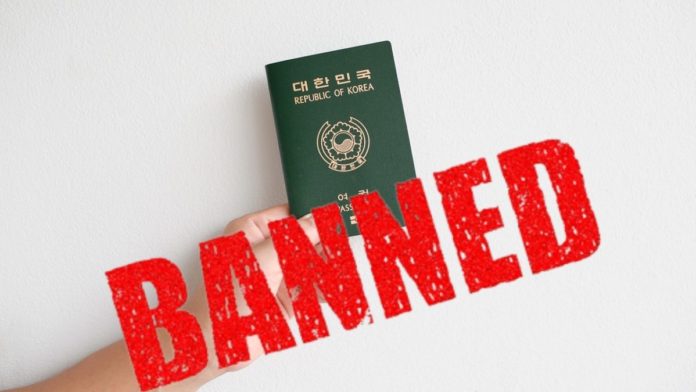 South Korea’s Ministry of Foreign Affairs has initiated measures to impose administrative sanctions on Terraform Labs’ CEO, Do Kwon’s, passport and hand over the same to the authorities. Along with the CEO, the regulatory agency, is also trying to invalidate passports of five other employees who are South Korean nationals.

Do Kwon seems to be holding a heavy cross to bear as his troubles deepen. Yesterday, the Seoul Southern District Prosecutors’ Office’s Joint Investigation Team issued an arrest warrant against Kwon along with five other members on allegations that include violations of the nation’s capital markets law. Just a day after, the South Korean Foreign Ministry has issued a notice that seeks to invalidate Kwon’s passport forbidding him to travel.

Mounting Pressure on Do Kwon

According to a local media report, Director Dan Seong-han of the Seoul Southern District Prosecutor’s Office for Financial and Securities Crimes has requested the Ministry of Foreign Affairs to invalidate the passports of five Korean nationals, including CEO Kwon and financial officer, Han Mo. Consecutively, the Ministry of Foreign Affairs issued an order to return the passports they possessed and imposed administrative sanctions such as refusal to issue new passports.

This comes shortly after the Prosecutors Office of South Korea announced a crackdown against Kwon and sent legal notices to all of Terra’s employees after the Terra/Luna debacle that caused massive losses for investors, globally. The collapse of stablecoin TerraUSD and its sister coin Luna sparked a massive cryptocurrency market rout that made the overall crypto market unstable, wiping out more than $200 billion.

The report also suggests that, since it may take almost a month for the passports to get cancelled, the prosecution will put pressure on Kwon and the others to return the passport to the Singaporean Embassy before the South Korean Foreign Ministry decides to nullify them.

Terraform Labs’ Slapped with a Fine of 100 Billion Won

Terraform Lab’s was also under investigation by South Korea’s National Tax Service on charges of evading corporate and income taxes. The regulatory watchdog had reportedly slapped Terraform Labs and its co-founder a penalty of 100 billion Won ($78 million). The Korean authorities also revived a special financial crime investigation unit called “Grim Reapers of Yeouido”, after a gap of 2 years to scrutinize the Terra/Luna incident.

The investigation revealed that CEO Kwon and other board members tried to flee abroad after they had liquidated the domestic Terraform Labs headquarters in Busan and Seoul branch before the tragic meltdown of LUNA.

0
The Co-Founder of Terraform Labs, Do Kwon is subject to strict actions from law enforcement agencies. In a recent development, Interpol has issued a...
Read more
Companies

0
In spite of the fact that Terra Classic suffered a massive blow earlier this year, it has recovered to rise again. One of the...
Read more
CryptoNews