The development of proposals in the field of blockchain and crypto-applications continues very active. This time we will talk about Sia and her currency, Siacoin.  Sia is a platform for decentralized cloud storage. By allowing the formation of storage contracts with peers, Sia allows its users to store data across a wide network of participants in a secure, private, and reliable manner.

Storage contracts define the conditions under which a storage vendor maintains user data and require the vendor to periodically submit storage tests to assure the customer that his data is in good hands. These contracts are stored in the blockchain in a manner that is publicly auditable.

Sia’s main objective is to introduce storage into the shared economy. Sia’s team believes that it is possible to free the unused storage of the world and unite it in a free market. Under this configuration, the data is distributed across a vast network.

Sia intends to enter the cloud storage market. The team believes that this multi-million dollar effort can be facilitated through blockchain technology. Offering an inexpensive, reliable, high-growth cloud storage solution can prove to be a good way to compete with costly storage providers at both an individual and enterprise level.

Storage contracts are formed between storage providers (also called hosts) and customers. This contract defines the conditions for the storage of data – specifically, the regularity with which the host is required to provide proof of its continuous storage of customer data. These tests must be submitted continuously until the contract expires. Contracts are provided through a blockchain similar to Bitcoin, but with some modifications. Hosts are compensated for presenting correct and penalized evidence for incorrect or missing evidence. These tests are publicly verifiable and present in the block chain, so that the consensus of the network can automatically enforce these contracts. This is significant since it means that customers do not need to verify their own evidence; the network can do it for them. 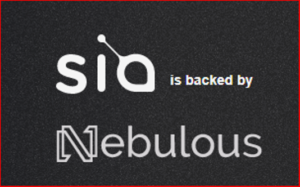 There are two ways in which someone can contribute to the Sia network and earn Siacoin. The first, and perhaps the most obvious, is to mining them. Mining coins keep the network safe by validating transactions. The second method is to become a host of storage space when renting space, with this you will be paid in Siacoin according to the contracts that you agree. Sia is developed by Nebulous Incorporated. The company has expressed its intention to make Sia its main source of income. The Sia platform is open source under the MIT license. Sia presents us with a new storage platform where the customer has complete control of their data.

Sia Network Series A Fund Raising Round ends with it getting $3.5 Million