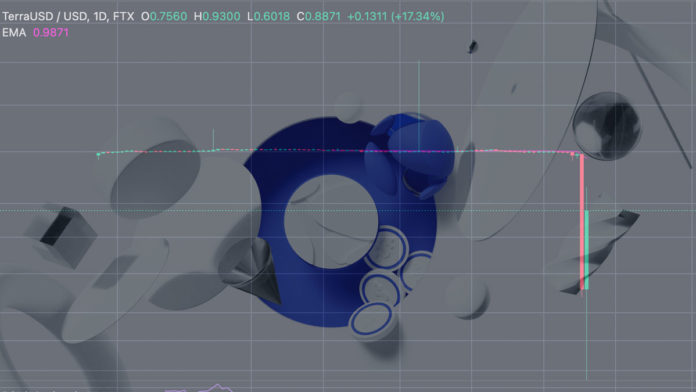 TerraUSD has shown a surprising trend in the past few days losing party with US Dollar. There are many reasons behind it.

A storm of geopolitical uncertainties afflicting the stock market today, including COVID shutdowns in China and the ongoing war between Russia and Ukraine, are causing cryptocurrencies to plunge.

Many of the industry’s participants are paying close attention to TerraUSD, a coin that is relatively stable and whose value fluctuates by just many percents – while a few volatile tokens have shed chunks of value – Bitcoin is down over 18% ($7,000) in the past five days. Ethereum is also down over 19% ($500).

The reason for this is that TerraUSD’s foundational stability has been shaken in the past few days. It was shaken most recently by a weekend stumble, which some believe to have been an attempted attack.

There was a sudden and massive surge of Terra USD (UST) supply over the weekend, which led to the price of the token dropping to under 99 cents, which caused the price of the token to plummet. In fact, it was not the first time UST had decoupled itself from the dollar peg as it was the first time that it used its reserves for a new bid to firm up its stability by buying up to $10 billion in bitcoins, along with $200 million in Avalanche tokens as an extra safety net.

It is nevertheless widely suspected that the event was premeditated, as hundreds of millions of dollars worth of cryptocurrencies were sold in mere moments, along with over $2 billion in withdrawals from Anchor Protocol, which is essentially an alternative bank for the UST stablecoin. The hashtag #Ponzi began trending on Twitter which some now claim was part of a smear campaign by the U. S. Treasury. In a tweet that has since been removed, UST developer Terraform Labs founder Do Kwon reportedly said,

“Men will literally attack a stablecoin unsuccessfully instead of going to therapy.”.

Some observers considered the stablecoin a success as it only lost a fraction of a percent in value before its algorithms began taking the price up to safe levels. Within hours-despite the dramatic catalyst, its price was back to normal within days.

UST, however, wobbled again on Monday, falling to below 98 cents before recovering by midday, leaving some to question the mechanisms behind algorithmic stablecoins, as well as their long-term prospects. It’s important to understand that stablecoins aren’t supposed to wobble at all.

Despite Terra’s troubles, its troubles may have even worse short-term consequences for the rest of the crypto market. Fears are growing that Terra may end up selling off its Bitcoin to hold its peg—thus making matters worse in the already grim crypto market, where more than $200 billion has been wiped out in the past week.