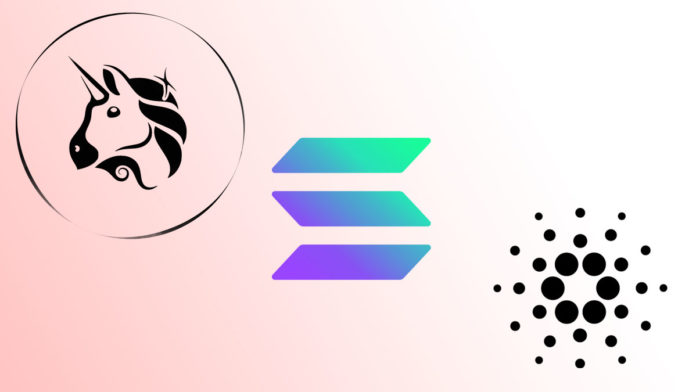 A new report by Santiment shows that Uniswap, Solana, and Cardano ecosystems are very active in developing their projects. The report is tweeted by saying that Uniswap is the first platform with the highest development activity in February.

🧑‍💻 #Uniswap $UNI has dominated the development activity leaderboard this past month, with a staggering 1,070 notable #github submissions per day from their developers. #Solana $SOL, #Cardano $ADA, #Polkadot $DOT, and #Kusama $KSO round out the top 5. https://t.co/UJe3KJLHib pic.twitter.com/GB1FhHs7Wx

“#Uniswap $UNI has dominated the development activity leaderboard this past month, with a staggering 1,070 notable #github submissions per day from their developers. #Solana $SOL, #Cardano $ADA, #Polkadot $DOT, and #Kusama $KSO round out the top 5.”

Polkadot and Kusama, the two primary blockchains of the Polkadot ecosystem, are the next two blockchains on the list of the top blockchains with the most development activity. Ethereum is ranked sixth.

It is no surprise that Cardano has one of the most active blockchain communities available on the market. The blockchain is evolving in order to provide users with more beneficial services. In addition to a large number of projects adopting Cardano for the launch of their applications, the blockchain itself has undergone numerous changes. In addition, Cardano ranked first on the list of the most developed assets in 2021.

Cardano founder Charles Hoskinson recently announced the successful introduction of the first Hydra Heads on the public Cardano testnet, which was previously unavailable. The Hydra Heads protocol, the first of a series of protocols, is a critical component in Cardano’s scaling strategy. Hydro refers to a collection of Layer 2 solutions that are targeted at improving the security and scalability of network infrastructures. 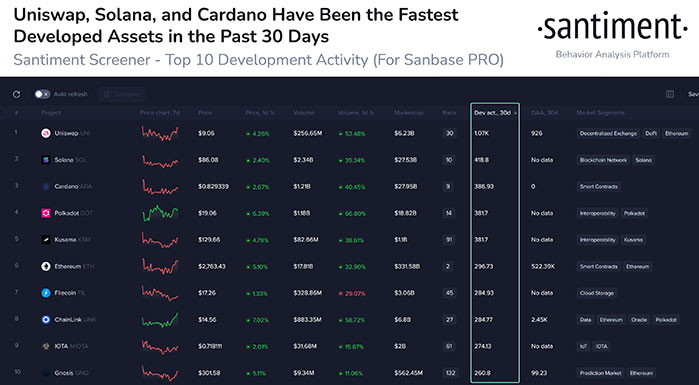 Because of the release of smart contract functionality for the Cardano blockchain, more developers have begun to use the network and design new use cases. Cardano’s Net Value Lock, also known as TVL, has been steadily climbing in recent months. As of now, according to the DeFi Llama tracking service, there is a total of $223 million in various contracts created on the Cardano network that have been locked. With the addition of staking, Cardano’s total value of assets (TVL) has surpassed $313 million at the time of publication.

Developer data from hundreds of publicly accessible Github repositories are tracked by Sentiment’s analytics. The greater the number of users who contribute to a project, the higher the project’s rating in the rankings. While development activity has little or no impact on short-term market values, it can be a positive indicator of a project’s long-term potential growth in the long run.

2021 was an exceptionally productive year for Solana, who recorded numerous ATHs and attracted numerous projects. The blockchain, despite certain recent issues involving the security of the technology, remains one of the most rapidly growing and promising platforms available on the market today.

Price increases are not considerable despite the positive news regarding increased development in blockchain communities. However, many assets are still far from their prior all-time highs, despite recent gains in the market. Some feel that the crypto winter is currently taking place.