Tron [TRX] to be listed on FCoin exchange 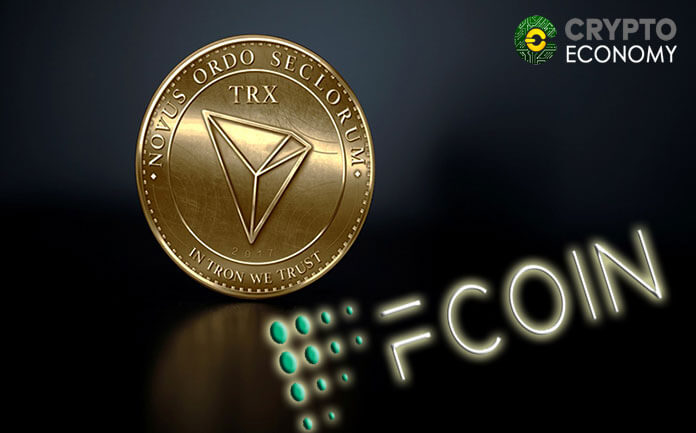 The CEO of Tron foundation, Justin Sun, took to twitter again with another piece of update indicating further advancements being made by the Tron foundation. The cryptocurrency is set to be listed on another exciting exchange known as Fcoin where users will be able to conduct transactions starting from the 19th of November.

As the tweet indicates, Tron users will be able to carry out withdrawals or deposits on the 19th whereas actual trading with other pairs will commence on the 21st of November. The new Tron pairs as indicated in the above post will add on to the current 27 pairs available on the exchange. Fcoin is an exchange that prides itself on transparency and upholding the principle of decentralization. It is known for being “the world’s first transparent digital asset trading platform with assets” with a commitment to “distribute 80% of the revenue to FT holders on schedule.”

The exchange’s founder is Zhang Jian, who is often recognized as one of the key figures in the early days of Bitcoin and blockchain technology. With financial assistance from leading investors such as Node Capital, Zipper Foundation, 8 decimal Capital and Singer Capital, Zhang established the exchange earlier this year and has seen unprecedented growth and acceptance in the cryptocurrency community.

The exchange’s statement of credibility shows its roots in internationally acclaimed developers and financial specialists whose works are evident in entities of high esteem.

“FCoin is developed by a top-notch international team independently. The core team of the FCoin community consists of people from world-recognized companies who have considerable experience in both Wall Street and crypto finance companies.”

Apart from being a major player in the establishment of the famous and successful Huobi exchange, Zhang himself has left a commendable legacy in blockchain technology as he stands as the creator of Bitcoin’s first multi-signature enabled wallet. Tron’s new listing follows a string of new listings and partnerships in the past few days. These include being listed on Turkey’s fastest growing exchange, Koinecks, and its incorporation into the highly esteemed app, getscatter.

As of today, Tronix’s price direction has gone bearish along with other cryptocurrencies with its value settling at 0.019142. The 24hr volume stands at 76 million whereas the marketcap stands at around $1.2 billion.