Tron [TRX] – Opera to Add Support for Tron to Its Web 3.0 Browsers in the Coming Days 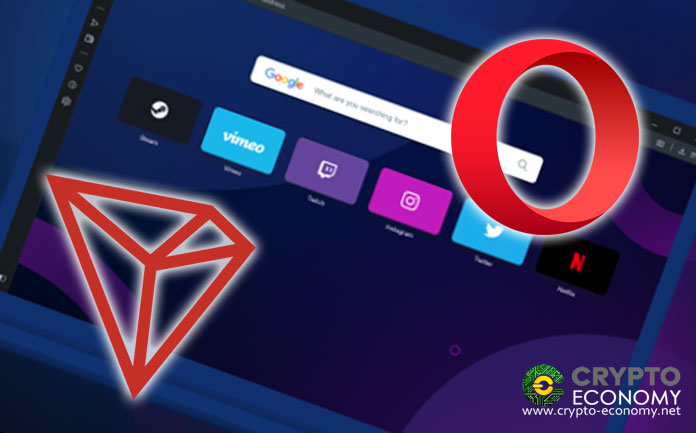 Web 3.0 focused mainstream browser Opera will be adding support for TRON blockchain in the coming days as its second major blockchain. Opera announced the news on Wednesday saying that it will be enabling support for Tron’s TRX token as well as the TRC-compliant tokens supported on the Tron blockchain.

So far the browser’s integrated crypto wallet was only capable of supporting Ethereum’s ether token and ERC-based tokens and decentralized applications. Following this news, the Tron community will be glad that the browser is opening up its ecosystem of more than 300 million users to interact with the Tron network.

“TRON is a popular, quickly developing blockchain with a swiftly growing dApp ecosystem. We are happy to open our browser to it,” said Krystian Kolondra, EVP at Opera, Head of Browsers in a statement included in the press release. He added that “By opening products to multiple blockchains, we are accelerating the mainstream adoption of Web 3.”

Tron is currently ranked among the top 20 largest blockchain networks according to market capitalization behind Ethereum [ETH], EOS and Cardano [ADA] smart contract platforms. It is, therefore, puzzling why Opera jumped over the other two blockchains on account of the network value to add support for Tron. However, as pointed out by Kolondra, the reason could be based on the fact that Tron is the fastest growing smart contract ecosystem this year.

Justin Sun, the CEO of Tron expressed his enthusiasm on the new development saying that,

“We are excited that Opera, a mainstream browser with hundreds of millions of users, will now seamlessly support TRX and other TRON tokens. Soon, Opera users will be able to use dApps on the TRON blockchain.”

Opera’s Web 3.0 powered browser is now available on both mobile and desktop devices. Initially launched on the Google Android platform in December 2018, the browser became the first to integrate a cryptocurrency wallet. Soon after in April this year, the browser expanded its reach offering iOS users the Opera Touch for iPhone. The desktop versions are also available for all platforms including Windows, Linux, and Mac PCs.

According to the press release, more blockchains are scheduled to be added soon following the Tron integration. Opera, however, did not reveal the selection criteria nor the timeline specifics. “Opera plans to add support for multiple blockchains within the next 12 months.”

0
The Tron network has gained tremendous traction. The blockchain added yet another feather in its cap after surging past a new peak in terms...
Read more
- Advertisment -