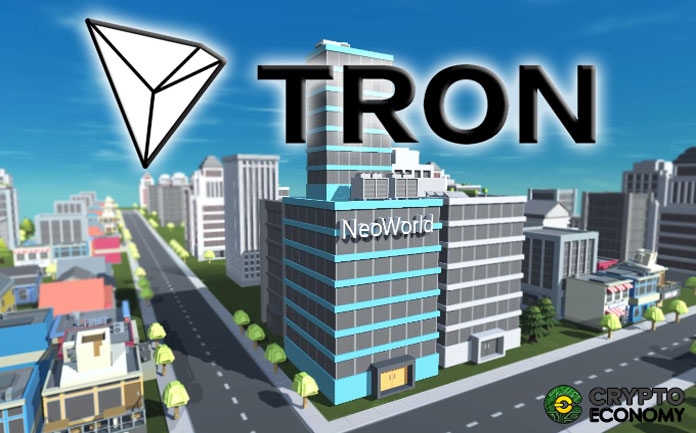 The Tron Foundation announced yesterday its most recent partnership with NeoWorld, a multiplayer online virtual reality world that runs on Blockchain technology. The announcement was made via the official Twitter account of Tron’s founder, Justin Sun.

“Tron has established a partnership with NeoWorld. The cooperation between both parties will revolve around entering NeoWorld, planning the NeoWorld Exclusive Island, strengthening the cooperation within the community ecosystem, etc.”, the publication states.

This partnership between this crypto project and the online virtual world NeoWorld aims to create NeoWorld Exclusive, guarantee the strengthening of cooperation within the Tron community, as well as the cryptocurrency system as a whole.

Currently, the Foundation has its own building within the NeoWorld virtual universe, a building that is among top ranks due to its height and working rewards. Further information on the plans and development of Tron in the cyber space, in the near future.

Can TRX be used in NeoWorld?

Right now, the ERC20-based token NeoWorld Cash (NASH) is the only one used in NeoWorld. And, although it has not been mentioned by any of the parties, it wouldn’t be far-fetched to think that some time soon, another type of cryptocurrencies – specifically, the TRX – could be used in the virtual world for purchasing goods and services.

Currently, Tron [TRX] is going through a stage of substantial growth and development. Not only was the partnership between both companies made public this week, but more news have positioned the TRX among the investors’ favorites.

One of those announcements was the inclusion of TRX in the Indacoin exchange this Wednesday. Since Indacoin is one of the oldest exchanges on the market, and it is based in London, Tron will have a much broader exposure throughout European and global markets.

Also this week, the news that the cryptocurrency had been included in the fastest growing exchange in Turkey, Koineks, was released.

All of this have helped placing the aforementioned crypto project in the spotlight and has caught the attention of investors, which translates into the upward trend that the digital currency has been experiencing in recent days.

Along with Bitcoin and Ripple, Tron (TRX), has undergone a gradual increase in its price, thus shaking off the prolonged lateral trend. The cryptocurrency has risen by more than 2%, its daily trade volume reached $115.891 billion and its price climbed up to 0.024 $.