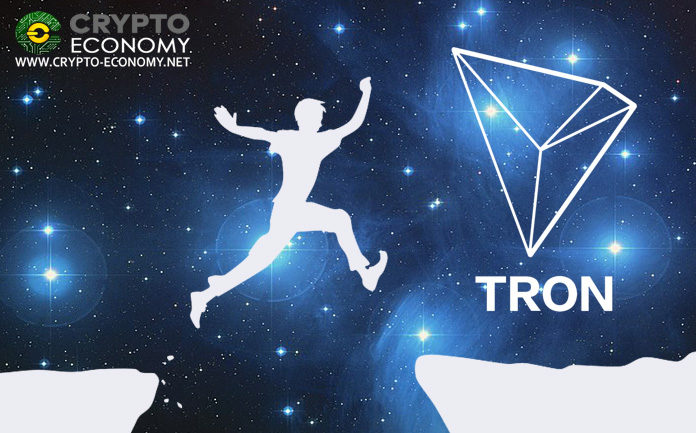 Tron network is focusing on creating entertainment- based decentralized applications and has seen a tremendous success in this regard. 513 DApps on the network is reported and an increase in transaction volume and smart contract also.

According to the latest data from @TRONSCAN_ORG , the total number of #TRON accounts has surpassed 3.3M, and is now 3304517. #TRX $TRX pic.twitter.com/lv06zC3f0F

Two new DApps is introduced to the community by the DApp report: Just.game and Eggie.world. Just.game was developed by developers of Fomo3D and second is a collection where users are asked to train their eggs, and they rewarded for doing this.

Although Tron has success in DApp game, the 24-hour price change shows a 0.72% fall of the cryptocurrency. At press time, Tron’s price was $0.0287 with a market cap if $1 billion and trading volume $398 million. HitBTC exchange via TRX/USDT trade pair contributed the most past in this trade volume.

The token’s popularity has been boosted after the Tron’s integration with BlockSpot which is crypto-market data platform. Well known exchanges like BigONE, CEX.IO and Bitpie are listing Tron because of this rise in popularity and demand.

0
Cryptocurrency exchange giant, Coinbase, is diving deeper into the world of Web 3 with its new product. The crypto exchange platform just rolled out...
Read more
Reviews

0
Bepro Network has converted itself from a decentralized gaming and betting protocol to a new platform that aims to revolutionize decentralized application (Dapp) development for builders without having a core development team.
Read more
Companies

0
Dapper Labs the firm behind CryptoKitties took the crypto sector with a bang in 2017 with its breed digital tokens whose transactions exploded Ethereum...
Read more
Companies

0
Through its subsidiary, Ground X Kakao together with its partners, have launched a public blockchain network dedicated to developers working in the blockchain space. While...
Read more
CryptoNews