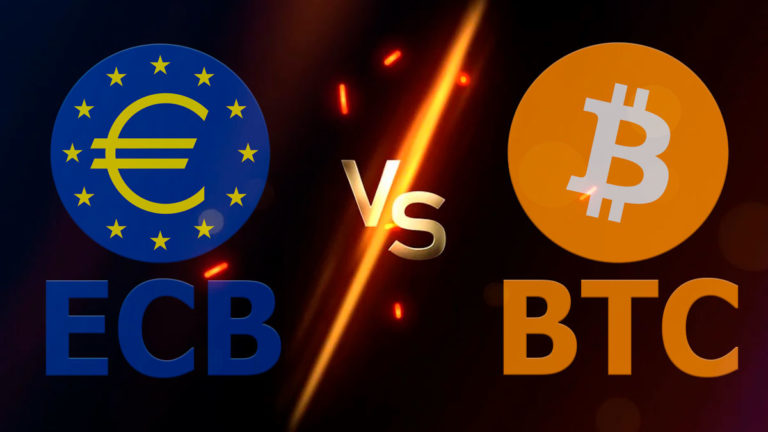 In an article dated today, November 30, the European Central Bank (ECB) has made a strong attack on the world of cryptocurrencies and blockchain. However, it is a position full of prejudices, lies and ignorance. Will this be the beginning of a “war” of the ECB against cryptocurrencies?

On its official blog, the highest monetary authority of the European continent has just published a post in which Ulrich Bindseil, Director General of Market Infrastructures and Payments, and Jürgen Schaaf, advisor to the Directorate General of the same department, make a strong criticism of Bitcoin and, ultimately, the entire cryptocurrency ecosystem. We are going to analyze step by step the arguments provided by the ECB and demonstrate that, once again, we are facing an attack by people who are completely unaware of what they are talking about. And what is even more dangerous, they are the ones in charge of dictating the rules that will govern our money.

Bindseil and Schaaf’s article begins their onslaught against the Bitcoin with an argument more than familiar to all those who are interested in cryptocurrencies: their volatility. Talking about the fall it has suffered in the last year, when BTC went from $69,000 to its current value at almost $17,000.

Like any young market, which is still taking its first steps, it is logical that assets have strong fluctuations. If we compare it to the stock market, which has been operating for more than 200 years (the New York Stock Exchange is 230 years old, for example) the cryptocurrency market has been around for little more than a decade. In which its value has grown exponentially, representing an excellent opportunity for both professional investors and small savers. According to experts, as the market matures, it will tend to have less volatility.

On the other hand, the ECB report predicts a dark future for the main cryptocurrency, stating that the “apparent stabilization” in the price of BTC in the $20K range “(…) is more likely to be an artificially induced last gasp before the road to irrelevance“.

There have already been several bearish periods that Bitcoin has gone through, such as in 2011, 2015 and 2018. As has happened in traditional markets, for example, in 1929 (Wall Street crash), 1973 (oil crisis), 2000 (dot.com bubble) and 2008 (financial crisis). All of them are part of a normal cycle in the life of any asset, from which it has always emerged stronger and stronger.

Without going any further, this year publicly traded companies had similar falls (or even worse) than Bitcoin.

There are more than a few who, almost since the creation of Bitcoin, have tried to bring panic to investors by saying that it would eventually disappear. They have all been wrong.

Bitcoin and its use

According to the Central Bank article, “Bitcoin is rarely used for legal transactions“. In addition to being a completely meaningless and easily refuted statement, it clearly shows that the authors of the article have a deep (and worrying) lack of knowledge about the world of cryptocurrencies. Something that is clearly reflected throughout the text.

Cryptocurrencies are an excellent payment method for the purchase of all kinds of products and services, as an alternative to transfer money between users around the world and even as a way to pay salaries for remote workers.

Moreover, the authors’ ignorance is completely exposed when they state that “real Bitcoin transactions are cumbersome, slow and expensive“. Something that is completely far from reality.

It should be noted that, despite the fact that the article only mentions Bitcoin, the authors seek to attack the entire cryptocurrency world. They are unaware of the characteristics and benefits that many of them provide.

Transactions with cryptocurrencies are extremely simple and quick to perform. It is enough to know the wallet of the user to whom you want to send money, choose one of the multiple networks available and enter the amount and the currency you want to send. Behind all this, there are cryptographic systems that guarantee and validate the information to make the whole process secure for the parties. And, most importantly, in a decentralized way. Allowing money to circulate around the world without legal or bureaucratic barriers imposed by banks or governments.

As for the cost of transactions, these are infinitely cheaper than doing them through any bank. What is the best proof of this? The Twitter account @whale_alert tracks the most important money movements on the blockchain on a daily basis. Let’s look at one from today:

The real value of Bitcoin

Continuing the endless list of lies that make up the Central Bank article, the authors claim that “Bitcoin’s market valuation is based solely on speculation.”

While many investors enter this market for the sole purpose of speculation (as is the case in every financial market in the world), Bindseil and Schaaf completely ignore the benefits of the underlying technology of all cryptocurrencies: the blockchain.

Bitcoin has pioneered the development of blockchain technology, which has enabled significant progress not only in financial matters, but also in education, healthcare, business management, banking and many others. The development of this technology is still in its infancy and has the potential to transform and revolutionize many sectors of today’s society.

The use of cryptocurrencies, mainly BTC, is the economic engine that allows the development of decentralized technology that is then applied to different sectors. Ignoring this, is like thinking that stocks are only speculative instruments without taking into account the companies behind them and everything they contribute to the economy and society.

In fact, in its ignorance, the ECB says that “these technologies have so far created limited value for society, no matter how great the expectations for the future.”

In another section of their article, special attention is devoted to the environmental issue related to bitcoin mining. As they claim “the Bitcoin system is an unprecedented polluter.” How many articles will the now eco-friendly ECB have devoted to criticize industries such as mining, oil or technology for their impact on the environment?

Back to the question, let’s bring the data that the authors of the note do not seem to give at any time: according to a report by the Bitcoin Mining Council (BMC) 60% of the energy consumed by Bitcoin mining comes from renewable sources. The data again disprove the ECB….

On the other hand, they talk about the technological waste generated by this activity. “Do you know how big is the mountain produced by the programmed obsolescence carried out by tech companies such as Apple, Microsoft or many others? Undoubtedly, infinitely superior to that of Bitcoin.

Moreover, cryptocurrencies are moving to mining systems with no environmental impact, based on the so-called proof-of-stake, which does not require hardware. Just as Ethereum (the second largest crypto) has done just this year.

Undoubtedly, the intention of the European Central Bank’s article is not to warn users about the possible risks of bitcoin, but rather to serve as an element of pressure to gain more popular support for trying to tightly regulate the cryptocurrency market. Something that many governments are trying to do, with the aim of controlling and taxing transactions that, thanks to cryptocurrencies, users can carry out simply and without intermediaries.

In this sense, it is mentioned that “While the EU agreed on a comprehensive regulatory package with the Markets in Cryptoassets Regulation (MICA), the US Congress and federal authorities have not yet been able to agree on consistent rules.” With this, the ECB is urging to accelerate the imposition of much tougher regulation on the sector, criticizing those who advocate greater freedom that encourages innovation.

Going even further, the article sends a clear threatening message to those banks and financial institutions that allow their customers to trade cryptocurrencies: “the financial industry should be wary of the long-term damage of promoting Bitcoin investments” and assures that banks are putting their reputation on the line by doing so.

It is striking that the ECB is now concerned about the reputation of banks, or has it not already been tarnished by the subprime mortgage crisis, or by the HSBC money laundering scandal in Mexico? It is worthwhile for everyone to reflect on the real interests behind these statements.

Different sectors are starting a strong initiative for governments and regulatory bodies to establish total control over the cryptocurrency industry. The ECB article by Bindseil and Schaaf, is but the tip of the iceberg of a narrative that has been gaining momentum in many countries.

Regulation seeks to attack the heart and essence of cryptocurrencies: decentralization. Since it is the communities themselves who regulate what happens within the blockchain, neither banks nor governments can control what each user does with their money or, ultimately, get the share of the pie that they would get from traditional systems.

On the other hand, different countries are starting to work on their own CBDCs, “cryptocurrencies” issued and backed by Central Banks. With these they will be able to control every transaction made by citizens and will have the power to approve or reject them at will.

These kinds of ECB articles seek to pave the way for the implementation of this “programmable money”. What will be the last link in its attack against traditional cryptocurrencies.

That is why, with completely false arguments that demonstrate the ignorance of those who govern, we are facing an unprecedented advance that seeks to bring fear and confusion to cryptocurrency users.

This attempt will be one more in search of imposing an iron control over people’s finances. However, decentralization and financial freedom have won their space in society and, despite what the rulers want, cryptocurrencies are here to stay. And this has only just begun….