Home CryptoNews Companies The Bitcoineta travels though Argentina and Latin America to bring Bitcoin and...
CryptoNewsCompaniesFeatured 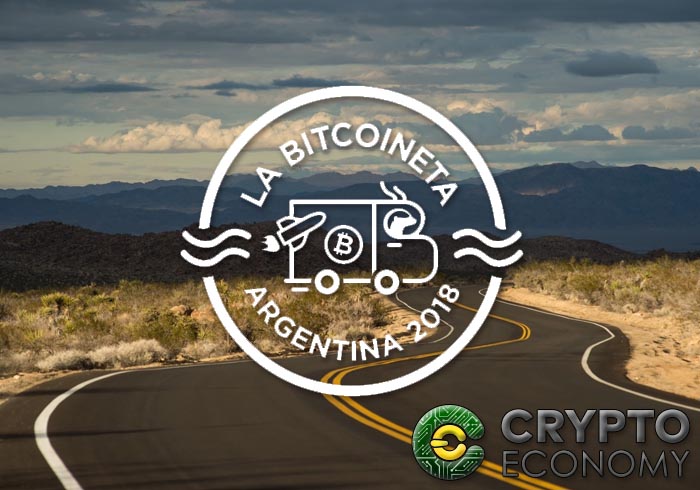 The world of bitcoin and everything that surrounds it is totally unknown topic for the vast majority of people. That is why the Bitcoin Latin American NGOs together with Bitcoin Argentina have started the Bitcoineta project, with which they want to spread their knowledge about Bitcoin to every corner of Argentina and soon to Latin America.

This project began on June 1 with the desire to connect technology with people, provide a base knowledge for those who do not know what this technology is or how it works and help developers and people interested in working with Blockchain to choose the best path.

“On a communicational level, Bitcoineta listens and Bitcoineta speaks, we plan to travel all over Argentina and then continue with Latin America, and we have even had proposals to continue on other continents.” said the Bitcoineta team in their presentation.

As they commented in their presentation, the tour will last until December, when they plan to arrive to Chile in time for LaBITconf.

The Bitcoineta Roadmap is not totally closed since they are receiving many requests to participate in events and they adjust their destiny according to the events that occur, in order to help and collaborate with as many people as possible.

The Bitcoineta team clarifies that, even though it is a non-profit project, donations are accepted to be able to carry out more actions, reach more destinations and be able to improve the project constantly.

The first part of the project that starts from Argentina and ends at LaBITconf in Chile has the funds covered to be able to keep going no matter what. From this point on, depending on the accumulated donations, they have other projects that they would like to include, such as installing solar panels to the bitcoineta, nodes or even adding miners.

The Bitcoin Argentina NGO project is an association for the development of decentralized ecosystems, which since 2013 has been working to get the most out of new technologies such as Blockchain and Bitcoin, both in Argentina and in the rest of Latin America.

LaBITconf is an event where experts gather to talk about cryptocurrencies and blockchain, and hold lectures on these new technologies for both beginners and experts. In these conferences they discuss topics such as blockchain integration, startups, cases of application of new technologies, Icos and other issues related to the sector.

After two years of holding this conference, this year the destiny of the Bitconf is Chile and the bitcoineta team will be present.

0
Bitcoin (BTC) has surged again above $60,000 levels as miners are holding newly minted coins. The world's biggest and best-known cryptocurrency hit $61,235 on Saturday, April 10, its highest in nearly a month.
Read more
Companies

0
Klaytn, a blockchain project led by South Korean internet giant Kakao, is going to be integrated with OpeaSea to bring its NFTs to the largest NFT marketplace.
Read more
- Advertisment -