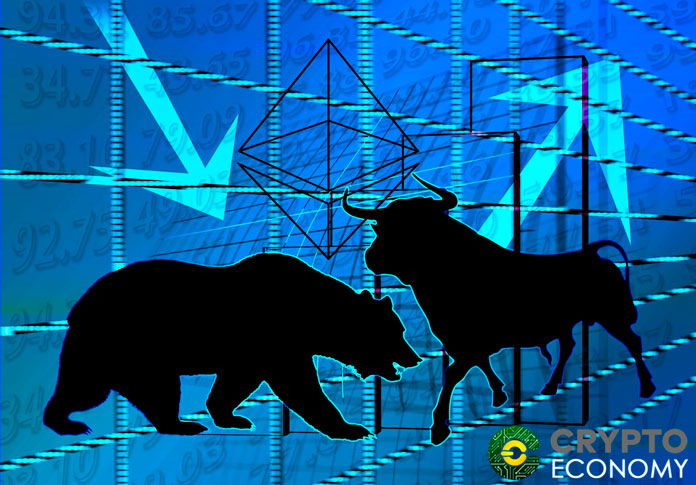 This week has seen massive price action to the downside where Bitcoin lost as much as 5% of its value in less than an hour on Thursday morning while the rest of the altcoins losing as much as double digits of their market value. Large-cap altcoins including Ripple and Ethereum lost between 10 and 15% while the lesser alts lost even more.

Friday, however, saw some flash of green from most of the cryptocurrencies but Ethereum remained in the red for the most part.

ETH, which was trading at around $225 before the market capitulation fell to just above $200 before proceeding to lose another $10 by the end of Thursday. The coin reached a low of $190. It has however regained some of its lost value and is currently valued at $200, a 5% gain in the past 48 hours. However, it has gained less than 2% in the past 24 hours.

Ethereum has been on a downward trend for the most part of this year and especially so in the past few months. This has led to the bearish sentiment among most investors who have opted to bet against the cryptocurrency. Short positions against Ethereum [ETH] have stacked up to record highs recently. Data available from the cryptocurrency exchange Bitfinex show that as more than three hundred thousand short positions against ether are currently open on the platform. They represent a value of close to $60 million.

Industry analysts have attributed the downward trend of ETH to the sell-off of ICOs that have been offloading their crowdsale gains and thus depressing the price of ether. Ethereum has lost as much as 90% of its value from the start of the year. The market sentiment has been that more ETH is still being hodled by these ICOs and they will soon be offloading their already discounted coins to avoid losing any more funds. A recent report by Autonomous Research helped dispel this myth and showed that most ICOs had already sold off their gains at a profit. The remaining ETH will not be enough to cause further price decline if it were to be off-loaded into the market.

However, despite the weak downward trend of the currency, the Ethereum community is still active and developing and improving on the code on the altcoin’s public GitHub repository.