There are crypto users who would look at the price of Ripple at spot rates and judge the performance of the project.

Indeed, they could right.

After all, most crypto platforms are judged chiefly by their ROI and, occasionally, the level of underpinning technology.

However, to fully understand Ripple’s value proposition is to appreciate the quality of their offerings and the level of dedication in breaking into a closed-loop remittance industry.

Admittedly, traditional players, who continue to mint billions of dollars every year, want to retain control despite the inefficiencies.

After over 30 years following the launch of Swift, Ripple and the XRPL is a big relief for obvious reasons.

Ripple’s Value is beyond ROI

In a recent interview, a supporter said Ripple’s value lies beyond the ROI.

Understanding the Value of #XRP.

"The proof is in that ROI" (return on investment).

Not just the elimination of prefunding (Nostro), but the use of the XRP *line of credit* too.

Instead, there is a lot to be drawn from how Ripple’s On-Demand Liquidity (ODL) eliminates the need for pre-funding through Nostro-Vostro accounts.

Add Ripple’s Line of Credit and plans of further enhancement through smart contracting and benefits of building on the XRPL; XRP’s future looks solid despite the ongoing SEC case.

SEC Trying To Regulate Something They Can’t

There is chatter of how Ripple could settle with the SEC.

Subsequently, XRP may re-list in other exchanges like Coinbase, whose leadership decided to freeze trading until clarity is found.

This, according to observers, could save the face of the SEC, who finds themselves with few bullets to counter Ripple’s lawyers.

It is the first non-ICO case. SEC’s Gensler is on a collision course with over seven decades of case law—something the agency can’t regulate. 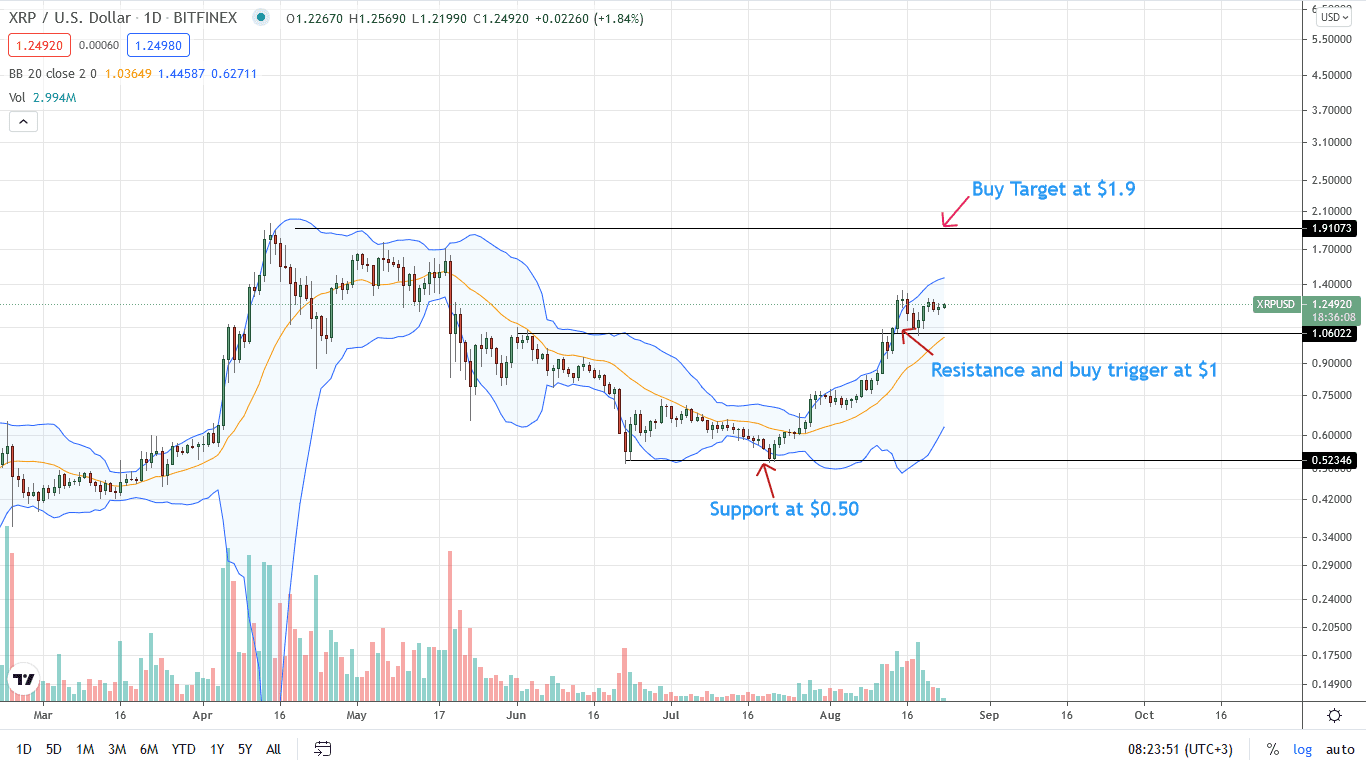 At the time of writing, Ripple is relatively stable versus the greenback on the last trading day. After steady gains through last week, XRP prices are now consolidating below $1.35.

Even so, XRP/USD prices are in an uptrend and could close above the $1.35 resistance level in a buy trend continuation. Already, Ripple is within a bullish breakout pattern above $1, a move that solidifies bulls’ conviction.

While XRP/USD consolidates, printing lower lows versus the upper BB, the uptrend is firm and the underlying momentum stronger. As such, every low could be a chance for ambitious buyers targeting H1 2021 highs in the medium term.

A sharp contraction below $1 would bog the uptrend, slowing down ambitious bulls.