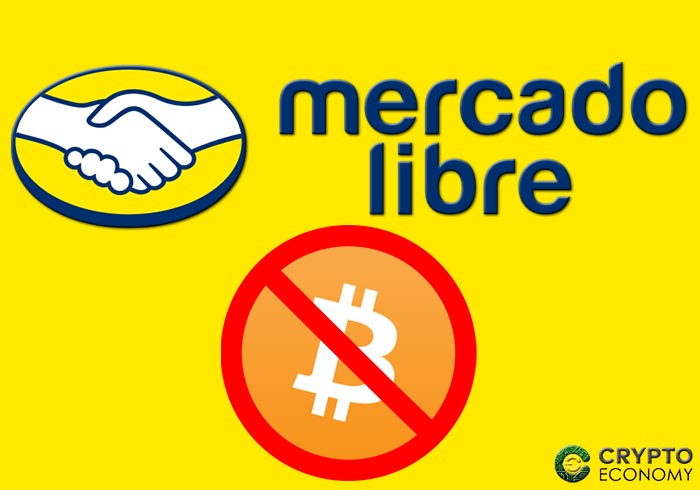 The Argentina based ecommerce venture, MercadoLibre, has announced Crypto related listings ban on its platform. The ban took place just a few days after the Latin American company received a $750 million investment from PayPal. Apparently, MercadoLibre will also ban all pre-paid gift cards as well as any digital assets utilized in games.

The e-commerce platform sent an email to its clients stating that the ban goes into effect tomorrow, (March 19th 2019), a move that directly takes on its competitors, such as eBay and Amazon.

Founded in 1999, the MercadoLibre platform is a company that operates online marketplaces dedicated to ecommerce and online actions. The company is quite popular and well established with operations in over 10 countries including, Argentina, Brazil, Chile, Colombia, Bolivia, Peru and Mexico.

According to Sean Summers, the Chief Marketing Officer at MercadoLibre, the deal between PayPal and MercadoLibre paves way for communication channels between the two company’s operation teams.

PayPal’s CEOs Downplay Bitcoin and Other Crypto Coins Former PayPal CEO, Bill Harris believes that Bitcoin is the ‘’greatest scam in history’’ and even goes on to add that it is “going to head a whole lot closer to zero”.

In an interview with CNBC last year, Harris boldly stated that;

“The cult of Bitcoin makes many claims: that it’s instant, free, scalable, efficient, secure, globally accepted and useful…It is none of those things.”

The current CEO Dan Schulman recently made remarks at the 2019 World Economic Forum in Switzerland, expressing skepticism in regards to mass merchant adoption of Bitcoin. According to Schulman, very few retailers are accepting, not just Bitcoin, but all cryptocurrencies in general. He however adds that he thinks ‘’the underlying technology is interesting’’.

“I have always thought that crypto was more of a reward mechanism for implementing blockchain, as opposed to really a currency,” he said.

Well, contrary to the two CEO’s opinions, other crypto bulls such as Lisa Ellis, an analyst, believe that crypto’s indeed capable of disrupting major legacy payments like Visa, PayPal and the likes.

0
Flipstarter is one of the recent Bitcoin Cash projects that shaped around an idea in January 2020. The primary purpose was to make a...
Read more
CryptoNews

0
The Blockchain Game Alliance (BGA), an organization committed to promoting blockchain within the game industry, has announced a new member to the alliance. The...
Read more
We use cookies to ensure that we give you the best experience on our website. If you continue to use this site we will assume that you are happy with it.OkPrivacy policy