The Bittorrent client team has stated:

“It is simply not possible that we launch our application, with its current protocol at the mainco of Bitcoin, and as a result we have decided to launch Bitcoin Cash within a few days”

This Bittorrent application was founded by Dr. Bedeho Mender, his first protocol version was designed in May 2014, where the transactions were cheap and the confirmation times low, it was clear that this version was not very good, but it was a good starting point. It was not until March 2015 where, as they say, the version was “refined”.

“We do this by establishing unique payment channels where payments and data are exchanged point-to-point: this arrangement is relatively safe under the assumption that unconfirmed transactions are relatively reliable for low-value payments, and it is only economical when the chain rates associated with the use of said channel are sufficiently low” 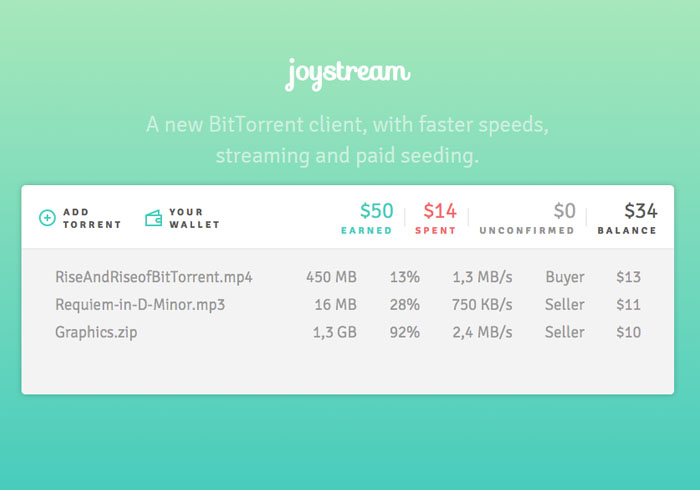 The JoyStream team has given the reasons why they have chosen Bitcoin Cash instead of the other cryptocurrencies, and they are:

The Bitcoin Cash community has dedicated itself to increase the capacity of its Blockchain in the long term, which ensures speed and the possibility of switching to the Bitcoin Cash network, among others.

To avoid confusions or misunderstandings, the JoyStream team has also announced that they are not taking any position in the HardFork or Sedwit2x debate and commit to using Bitcoin Cash under any circumstances, they just want to solve the problems of their users.

Do you want to help the project?

On the home page of JoyStream, they invite you to collaborate with the project, and contribute by notifying them of any error or limitation that may arise during the use of the platform, in order to continue improving and growing.

For the help provided by the new users, each day the new participants will be rewarded with small amounts of Bitcoin Cash.