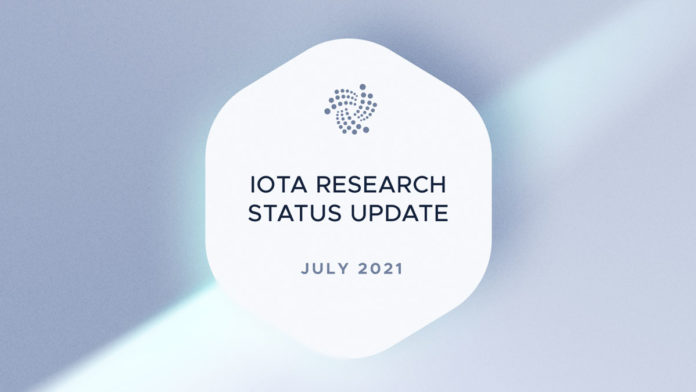 The research team of IOTA published the latest details about the research status on the blockchain describing June activities. The July 2021 report is now published with details about DevNet implementation, protocol update, specifications, networking, and sharding.

IOTA Research & Development team focuses on improvements and future upgrades for the protocol as well as the blockchain to make it more ready and practical for users. The monthly update report shows where the projects are and what are the next steps.

IOTA released DevNet at the beginning of June 2021, which was great news for developers and partners. The R&D team continued normal tasks from then to optimize the blockchain more and, most importantly, focus more on the Data Sharding components. The latest research update from the team shows that specifications and congestion control are at top priority for them, too. The team now has access to data from DevNet and can inform the public better about the tasks and outcomes.

As mentioned above, the IOTA Research Department will focus more on the DeVnet Implementation in the coming tasks. The team has access to data from the nodes on the DevNet and has discovered some bugs that need to be solved. Other parts of the implementation that are under improvement are the scheduler and solidification mechanism.

The launch of DevNet helped R&D teams receive useful feedback and data from users faster. Many of the components that will go live on the IOTA 2.0 network are now available through DevNet. The bug reports and feedback helped teams find the parts that need to be improved. Thanks to the modular nature of the IOTA 2.0 network, some parts can be improved while others continue their normal behavior. IOTA Research Department will work on the modularity of the consensus algorithm, remove the need to vote on timestamps, and remove the need for weak approvals in the coming improvements.

As mentioned above, sharding is another part of the focus for the R&D team. According to the announcement:

“During the last two months, the entire research department was focused on two things: DevNet development and the specifications release. Therefore the sharding group entered, together with some other groups, a hiatus to allow our workforce to be properly allocated to those tasks. With the release of the DevNet and the first specifications release completed, the research department is back working on its sharding solutions.”

Data sharding can bring many opportunities for IOTA blockchain. It can improve the throughput of the network for data messages.

0
IOTA Foundation announced a new phase of partnership with ClimateCHECK with more focus on increasing trust in the climate data. The partnership is part...
Read more
- Advertisment -
Posting....