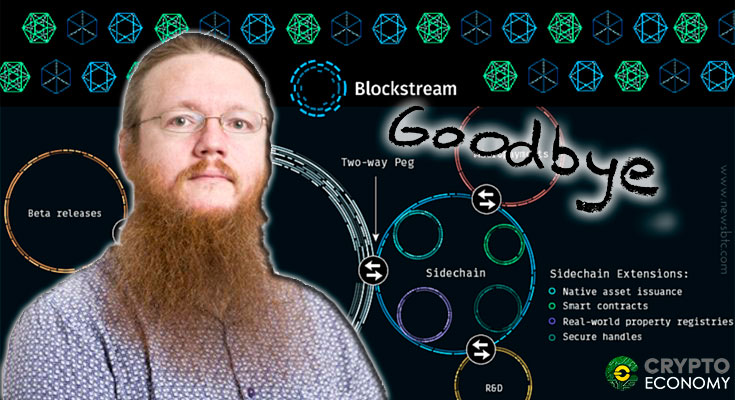 Bitcoin Core developer and Blockstream co-founder Greg Maxwell has announced he resigned from the company as he wanted to concentrate more on the cryptocurrency’s development.

In an email sent to the Core mailing list, he states he wants to have more time to spend working on Bitcoin upgrades by his own. “In order to spend more time working independently on deep protocol work, especially new cryptographic privacy and security technology for Bitcoin, I resigned from Blockstream last November,” Maxwell wrote.

He further explains how Blockchain came to be, as in the earlier moments, Satoshi’s coin had the community but not the financial support other open-source projects (like Linux) have.

“Without sustained financial support, some kinds of bigger projects seemed really hard to pull off with developers needing to share time between non-bitcoin employment, their families, and their other interests. For the most part, back then early Bitcoin companies weren’t investing in public technology, at least not effectively.” he said.

He and his team hoped that Blockstream could act “as an anchor of support for technology development”, thus helping the community to grow. “I think that has been a big success. The Bitcoin industry has matured a lot and today Bitcoin Core gets significant regular contributions from many organizations (…) and a volunteer community much larger and more active that it has ever been before.” the email reads.

His resignation, however, is not a total exit from the BTC. According to him, quitting from the company will allow him to have more time to focus on many other technologies that could help mature Bitcoin in many ways, such as Bulletproofs, Confidential Transactions, signature aggregation, improved propagation and synchronization.

“I’ll be spending more time helping with these and other things, and will no longer have insight into Blockstream’s activities or a Blockstream email address (…) but otherwise this shouldn’t change anything for anyone here.” he finalized.

Blockstream is one of the three startups, along with ACINQ and Lightning Labs, to have been conducting a series of tests in order to bring layer 2 technology to the mainnet, announcing their results mid-December 2017, where they were able to send various payments using this network. Although it’s yet to be pulled off from Bitcoin’s testnet and into the aforementioned one, some companies have started to use it.