Recently has come to light the new Bitcoin Core in its version 0.14, Bitcoin’s reference client. This release contains some significant improvements in performance, especially when creating a node. In addition, it changes the management of mempool that allows users to retrospectively increase the share of a transaction and many more things.

With the version number 0.14 Bitcoin Core, Bitcoin’s reference client reaches a new, more comprehensive and secure version. Like the other “round” versions, it contains no changes that are in any way controversial or a mild fork, but implements basic software improvements. It’s like a release from the engine room.

The most significant could be the performance improvements of version 0.14. Developers improved the script signature cache, allowing more signatures to be cached. The old Check Points by Assume-Valid were replaced, which allow the user to decide for themselves which blocks the signature verification is skipped when starting a node. In addition, they enabled the UTXO-building process to use the previously reserved memory for mempool and refactor the P2P network connection so that the blocks recover more quickly.+ 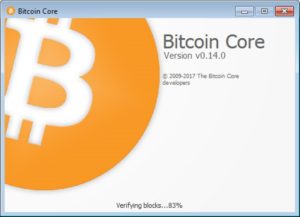 While the performance of the entire system has been improved, the most noticeable effects could be noticed when it comes to starting a new node. This process requires a huge amount of bandwidth and CPU, memory and hard disk work. According to Core, the time needed to establish a node has been reduced to about 50 percent. For the future of the network, improvements like this are vital, since the data you need to process to start a new node will inevitably continue to grow.

Also important, but especially for the current use of Bitcoin, is the newly introduced option to enable Replace-per-Rate (RBF) for each transaction. RBF allows users to pass an output already sent, but not confirmed again. Miners who have activated RBF may replace an old transaction with a new one with the same entry if rates are higher. A newly introduced “bumpfees” command allows the user to use RBF to increase the charges of a transaction retrospectively. What is something that many users who experienced transactions blocked in the mempool may wish to do so.

The same environment, Bitcoin is currently facing – the beginning of a fee market – makes another new Bitcoin Core feature interesting; Instead of deleting the group of unconfirmed transactions that you have compiled – the so-called mempool – when you close it, it saves and rebuilds it when it is restarted again. This new feature saves a lot of bandwidth consumption, which nodes need with a full mempool to request and receive the transactions again to remember the mempool – and to get and respond to the request of other restart nodes.

In addition to this, there are many other changes in Core 0.14, some smaller and many larger improvements, covering all aspects of Bitcoin; The RPC API, blocks, transactions, P2P, networks, validation, construction, GUI, wallet and so on.

You can read more about Core 0.14, with the release notes available on the Bitcoin Core website.