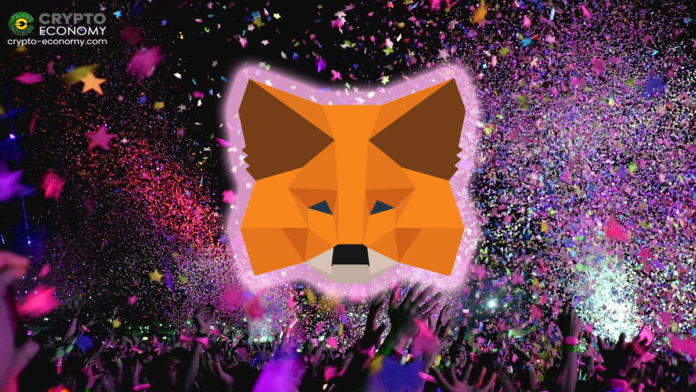 Popular Ethereum web wallet and dApp browser MetaMask had a great reason to celebrate on New Year’s following a one week ban from the Google Play Store. The Android application was relisted on January 1st after being banned on Boxing Day in what Google Support claimed was a violation of the Play Store listing policies.

Metamask stated that they had been banned for allegedly offering mining services through their application. “They cited their policy that bans mining on mobile, which we don’t [offer]. Appeal rejected,” Metamask tweeted on December 26th. Metamask made an appeal to Google’s Play Store support team who again rejected the appeal citing the same policy document on mobile mining. “It’s unclear whether the reviewer doesn’t understand the policy, or whether they are enforcing an unwritten policy,” Metamask concluded.

However, on January 1st, Metamask announced in a jovial tweet “Happy New Year! Upon careful consideration, Google has permitted The MetaMask mobile app back on the Google Play (Android) store!” Google had reneged on there early decision to restrict the app from its platform without giving an explanation. “Thanks to all the believers in an open web for speaking out in our support!” Metamask added in the tweet announcement.

The Metamask ban came around the time that Google’s fully-owned video streaming service YouTube had also banned content related to cryptocurrencies. Only a few days later did Google unban the content previously banned on YouTube saying that it had been banned through error. “These removals were made in error. The team is in the process of reinstating all videos that erroneously had videos affected by the same root cause,” a YouTube spokesperson told industry media last week. Last week’s Metamask ban is not the first time Google has restricted the application on its platforms. In July 2018, Google also banned the application from its Google Chrome Web store citing violation of policy directions. The app was reinstated a successful appeal.

Coinbase exchange is also undergoing a similar situation on the Apple PlayStore after Apple advised it to remove dApp support features from its popular mobile wallet app on December 28th. In response, Coinbase CEO wrote on Reddit that,

“This is really unfortunate to see. Apple seems to be eliminating the usage of Dapps from the App Store[ …] Presumably this would extend to other wallets as well (Trust, Argent, Metamask) it’s beyond Coinbase and IMO a very big threat to the ecosystem.”