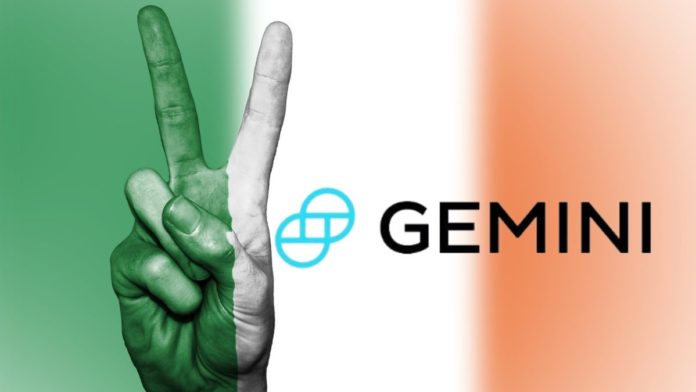 The deepening crypto winter and associated collapse of some projects and crypto assets, have triggered significant losses, as well as exposed idiosyncratic risks and vulnerabilities within protocols. The turmoil did sharpen policymakers’ awareness of the need to regulate the crypto landscape.

The unprecedented losses caused by the recent rout appears to have toughened the regulatory resolve but that has not stopped crypto exchanges to get approved for operations in various jurisdiction amidst the chaos.

Gemini Registered as VASP in Ireland

We are thrilled to announce that Gemini is the first company to be registered as a Virtual Asset Service Provider (VASP) by the Central Bank of Ireland.

Gemini has become the first company to be registered as a Virtual Asset Service Provider (VASP) after receiving approval from the Irish Central Bank according to the official announcement.

The exchange first launched its EU headquarters in Dublin last year. It will now focus on growing its presence in Ireland to serve its citizens as well as others in Europe. Gillian Lunch, Gemini’s Head of Ireland and EU further detailed,

“We are excited to offer our products and services to individuals and institutions in Ireland and countries in Europe. Crypto investors will be able to access Gemini’s exchange and custody services to buy, sell, and store over 100 cryptos with EUR and GBP.”

Besides, the VASP registration comes five months after it secured the Electronic Money Institution (EMI) authorization from the Central Bank of Ireland.

Several crypto platforms including some of the most prominent industry players have cut employees and rescinded job offers. The “turbulent market conditions” have prompted Gemini to make a second round of lay-offs.

As reported earlier, the company has laid off around 68 employees, or 7% of its workforce silently to cut its operational cost. An anonymous source reportedly said that Gemini has adopted extreme cost-cutting measures and further downsizing could be possible.

Cameron Winklevoss, co-founder of Gemini, neither confirmed nor denied the report but instead wrote in a Slack message saying

“It’s come to my attention that at least one team member thinks it’s a good idea to post a snippet of our technology operating plan on a third party website (Blind). Wow, super lame … if you are leaking company information, you are exhibiting a low level of consciousness and respect for your fellow team members who greatly benefit from the openness we are trying to create and foster here.”

Gemini had initially slashed 10% of its staff in June this year, citing the impact of the market downturn. Reports suggested that the organization’s director of business operations and intelligence, who most recently was the deputy chief compliance officer, and its head of risk exited in recent months.

0
Investing is become essential in today's world of economic uncertainity. It can help to create wealth, meet financial goals, beat inflation, and save for...
Read more
- Advertisment -
Posting....
We use cookies to ensure that we give you the best experience on our website. If you continue to use this site we will assume that you are happy with it.OkPrivacy policy