As announced on March 8, the team of Fujitsu Laboratories Ltd. In collaboration with Fujitsu Research and Development Center Co. Ltd., they have developed a technology that can detect the risks associated with smart contracts in the network of Ethereum.

What is a smart contract?

Starting from the basis that a contract is an agreement, between two or more parties, which are committed to comply and respect certain terms, we can say that intelligent contracts are a set of actions and automated protocols within the blockchain , that will verify that the terms of said contract are met.

When a new technology such as Blockchain, cryptocurrencies or Smart Contracts etc, are created, problems arise that have to be solved, this is what Fujitsu has done with smart contracts, because as they say, if a smart contract contains errors, It can lead to economic losses.

The technology created is based on algorithms that can detect six types of risks associated with the smart contracts of the Ethereum network and also identify the location of that code, in a manual review these problems would be difficult to find, so this technology will facilitate the creation of Smart Contracts more secure.

Before this technology, as smart contracts are automatically verified and executed and copied through the blockchain, once they are launched, they can not be stopped even if errors are detected, which could cause serious problems for users

In order for these Smart Contracts to become part of our daily life, all failures detected must be improved and corrected.. 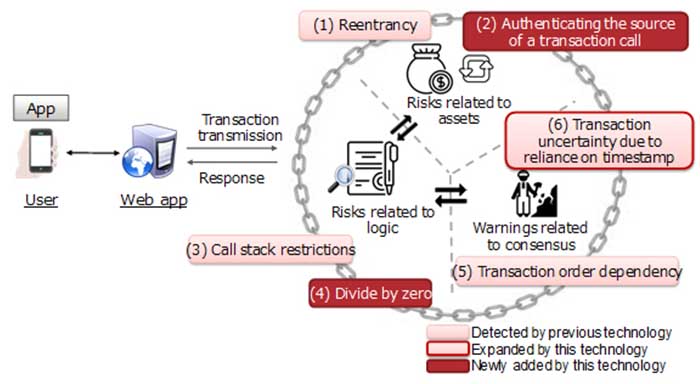 When analyzing the results of this technology, it has been discovered that the tools used so far detected around 67% of errors, and the new technology detects almost 100%, in terms of accuracy it has reached 88% of correct answers, both in detection of risks and in identification of the location of the problem.

The future of Smart Contrats and Fujitsu

Fujitsu has also announced that they will not only verify the smart contracts network of Ethereum, but will soon develop technologies for the verification of Hyperledger and a broad technological development related to the construction of secure systems using blockchain.

Fujitsu is not the first technological giant that is working with the Blockchain, every day more companies join this great technology, BMW or SAMSUNG among others, they do not want to miss the opportunity to be in the lead of the race of the Block Chain.