The adoption of cryptocurrencies as a way of payment and exchange is an irreversible fact. This time we will talk about how big investment companies such as Fidelity not only incorporate cryptocurrencies into their systems and methods, but also how they approach assertive philanthropic activities in the concept of crypto-altruism.

Abigail Johnson, CEO of Fidelity, admitted at the May Consensus Blockchain conference in New York that “she’s a big fan of Bitcoin.” “I am a believer,” he said. “I am one of the few who have before you today a large financial services company that has not given up on digital currencies.”

She also announced that Fidelity’s customers would soon have access to their crypto-corporate balances through the company’s website. The only requirement is that these customers have an account with Coinbase.

Johnson also pointed out that a number of other Fidelity projects are in motion to take advantage of and boost the potential of bitcoin and other digital currencies. They rightly believe that criptocurrencies could, “fundamentally change the structures of the market and perhaps the architecture of the Internet itself.” 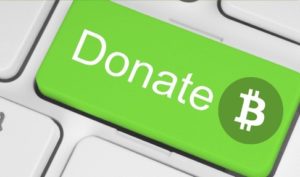 In 2015, Fidelity’s philanthropic arm, Fidelity Charitable, an independent public organization that through donor support helped more than 235,000 non-profit organizations with $ 26 billion in grants began to accept bitcoin donations. It received more than $ 7 million in bitcoin donations in 2016 and had already captured $ 9 million during the first half of 2017, according to its Fidelity Charitable 2017 Giving Report.

Bitcoin has also been shown to serve as an alternative tool for receiving charitable contributions. While media attention continues to highlight bitcoin as a preferred currency for criminals and even sometimes suggesting its demise, a strong use case is evolving around the viability of the digital currency as a philanthropic use case. In fact, Bitcoin’s growing interest and the strong performance of crypto-coins in 2017 are probably two of the main factors contributing to this increase in crypto-contributions and crypto-altruism.

As people discover ways to contribute to our world, bitcoin is proving to be a solid alternative to facilitate money transfer. And with an increasing number of nations codifying the legality of cryptocurrencies along with a stable network of users participating in the ecosystem, it is reasonably expected that the number of cryptographic contributions will increase in the coming years.