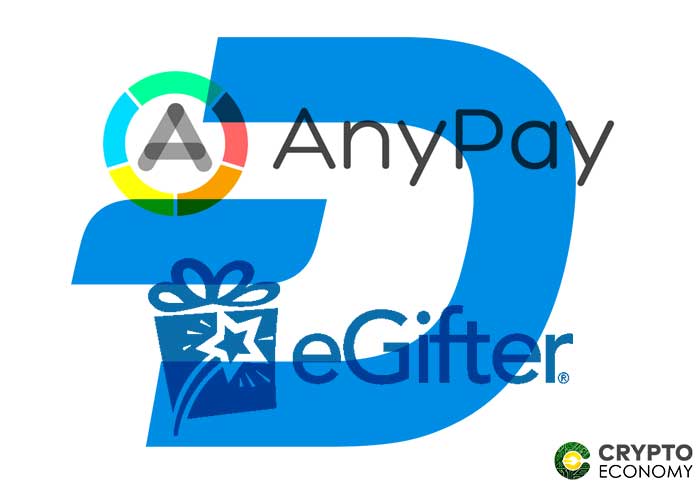 A recent partnership between the global payment network Anypay and the gift card marketplace eGifter will now allow Dash digital currency users access to the over 300 US and global brand eGifts present on the eGifter platform. Dash is one of the cryptocurrencies supported by Anypay which include the leading cryptocurrency Bitcoin and some of the other major cryptocurrencies. Dash, however, with its features geared towards making e-payments fast and effortless makes it especially uniquely built to benefit from this partnership.

With this integration, Dash users will not be forced to turn their coins into fiat before purchasing an eGift card. They will be able to do it directly through the Anypay platform.

eGifter.com CEO Tyler Roye expressed his enthusiasm about this partnership saying that “We are very excited to be able to bring Dash onboard as a payment method. We’ve been bombarded with requests to accept DASH on our site, so we were anxious to join the DASH community, and Anypay made it happen quickly and easily.”

Anypay CEO Steven Zeiler made similar comments saying that his team is “delighted to be able to connect the Dash community to millions of products and services available from the hundreds of major brands offered by eGifter.”

Anypay payment system offers retailers a free PoS app that allows them to accept cryptocurrencies globally. In a previous partnership with CoinText, Anypay was able to employ an innovative feature where it could allow for payments through text messages. This makes it even easier to onboard no-coiners who are looking for options to make their payments at retailer outlets.

Previously eGifter has been accepting some of the major cryptocurrencies such as Bitcoin and Bitcoin Cash for its customers who were purchasing eGift cards. This was possible sans the partnership with Anypay. However, the demand from their customers pushed them to look for a way to integrate Dash.

The company could have opted to enable Dash payments directly similar to other digital currencies on the platform but the partnership with Anypay allows for split second transactions, a feature which when paired with Dash’s InstaSend would make the integration a major selling point and give Dash an advantage over the other cryptocurrencies.