The cryptocurrency market has started the week with a sharp decline with the implosion of FTX still rippling across the industry. It seems hobbling liquidity at firms with exposure to FTX, increasing regulatory scrutiny in several countries and hawkish Fed commentary have contributed to the downward spiral of digital assets.

The crypto market has been experiencing drastically dipping prices after hitting an all-time high last year. The FTX debacle served as a catalyst for the dramatic cryptocurrency market meltdown. The breakdown of what was once one of the world’s biggest crypto exchanges has impacted not just investors and customers but the entire crypto ecosystem.

The dwindling state of the present crypto market scenario resulted in unprecedented losses for several companies. Major cryptocurrencies like Bitcoin (BTC), Ethereum (ETH), and other altcoins are struggling to retain their market dominance in the wake of the FTX frenzy that has spooked investors.

According to CoinMarketCap, the global cryptocurrency market cap was trading sharply lower around $796.10 billion, tanking about 4.32 per cent in the last 24 hours. The market cap remained below the $1 trillion mark as FTX’s bankruptcy continued to send shockwaves rendering several crypto companies on the brink of a severe liquidity crunch. However, total crypto market volume over the last 24 hours witnessed an uptick of a whopping 84 per cent to $63.85 billion.

Bitcoin (BTC) started the week plunging more than 3 per cent over the past 24 hours to currently trade at $16,102. The flagship token dropped 4.02 per cent in the last seven days dropping more than two-thirds of its value relative to its all-time high.

The lowest intraday BTC trading price was $15,975.75. It is likely that volatility will continue in the short term as investor confidence is ebbing. Edul Patel, CEO and Co-Founder of Mudrex continued to remain bullish on Bitcoin (BTC) noting,

“Even though BTC is down, it managed to stay above $16,000, holding its support position for an impressive nine days. If buyers can push the price of BTC above the overhead trendline, we might see an upward trend.” 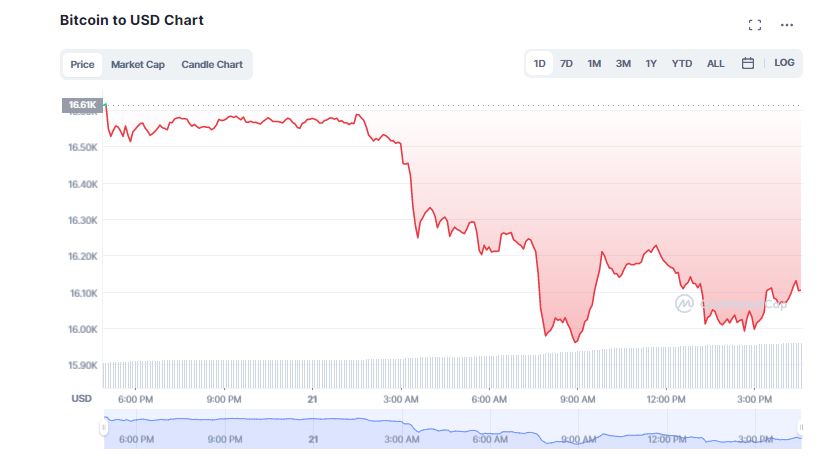 ETH, Altcoins Stuck in a Rut 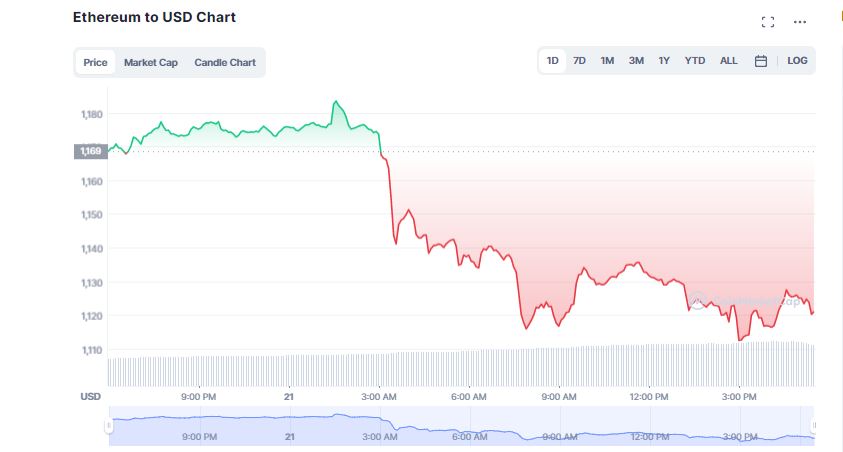 Meanwhile, Ethereum (ETH) fell nearly 5.50 per cent in the last 24 hours to $1,125. Ether nosedived more than 10 per cent over the past one week after the fallout from FTX collapse sparked contagion worries that has spooked investors. Patel emphasized that if bears continue to haunt the digial asset, ETH may trickle below $1,080. He added,

“Ethereum was seen changing hands below its support level at $1,200. If the selling pressure does not subside, we may see ETH drop to $1,080. ETH will likely remain under the bearish threat until the price remains below the trendline.”

Major altcoins including XRP, Cardano (ADA) and Polygon (MATIC) were trading with big cuts in the range 5.58 per cent to 7.03 per cent. Solana (SOL), was among the worst hit cryptocurrencies in the FTX fiasco. At the time of writing, SOL plummeted almost 6.70 per cent over the past day to trade at $11.80. Dogecoin (DOGE) price today was trading lower declining 7.79 per cent at $0.075 whereas Shiba Inu (SHIB) shrank more than 4 per cent trading at $0.000008.

The crypto market bloodbath can also be attributed to the increasing Fed rate hikes. As per a report, the Federal Reserve may increase interest rates by 0.5 percentage points in December. Despite a fall in the U.S. consumer price inflation last month, the Fed will continue with tightening its monetary policies to tame inflation.

The FTX turmoil has attracted increased regulatory scrutiny over cryptocurrencies all across the world. Financial regulatory authorities anticipate that the digital assets ecosystem in general clearly needs a regulatory framework to ensure consumer protection and transparency. They also believe that building investor awareness is a critical criterion that must be addressed at the earliest.

Recently, United States Senator, Cynthia Lummis specified the need for clearer crypto regulations. She remarked the recent events that have transpired between FTX and Binance are the clearest example yet of why we need clear rules of the road for digital asset exchanges in the United States.

In the recent G20 summit, leaders of the attending countries called the need for international rules to govern crypto space claiming the potential risks to “financial stability” needed to be mitigated.

Therefore, it is evident that not just one but a series of aftershocks in the wake of FTX chaos has pushed the entire crypto market to trade in deep red.