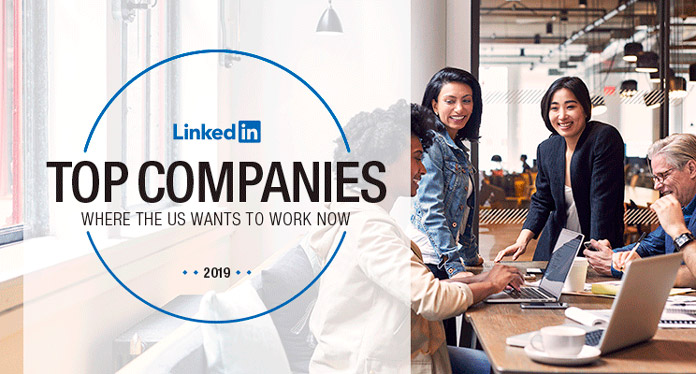 LinkedIn’s annual list of Top Companies that people want to work for is out this week and the list is extremely devoid of cryptocurrency focused companies. Only one company made it to the list and its none other than leading US-based cryptocurrency exchange Coinbase. Coming in at number 35, the company beat out Twitter (36), Intel (37) and financial services giant JP Morgan Chase (44) which recently announced the launch of an in-house stablecoin token backed by the bank’s dollar reserves. LinkedIn releases several versions of the list for several countries so as expected, Coinbase and JP Morgan Chase among other conglomerates appeared in the US Edition.

Microsoft and LinkedIn did not get consideration due to their inherent conflict of interest. LinkedIn is a subsidiary of Microsoft. The list comprises of companies that are popular with employees. That is, places at which employees want to work and for those that already work for these companies, they rate their experiences and engagement levels between them and their managers and bosses.

Leading the pack is Google’s parent company Alphabet which also owns popular streaming service YouTube, Nest among a host of several other companies and startups. Google’s has a headcount of 98,800 employees across all its locations including those outside the United States. Closing out the first and second runners’ up positions are Facebook and Amazon respectively. Facebook also owns the popular social media platform Instagram and popular messaging application WhatsApp. It currently has a global headcount of 36,000 employees. Leading online retail platform Amazon owns other popular businesses including Audible, Zappos and Whole Foods. Headcount across all its services comes to about 250,000.

According to LinkedIn, Coinbase has an estimated headcount of about 600 employees based in the United States. In the recent past, Coinbase has made hires in the departments of engineering, IT and human resources. Part of the fun that employees have at Coinbase is being paid either partially or wholly in Bitcoin cryptocurrency. As many as 40% of the employees have a portion of their salaries allocated to cryptocurrencies. In addition, Coinbase offers its employees above standard perks to attract and retain top talent including perks for both women in tech and members of marginalized groups.

LinkedIn reports that it ranks companies in the Top Companies list by analyzing their performance across four different categories which include the level of interest in the company by prospective workers, employee engagement, job demand as well as employee turnover rate.

0
After an extended bullish streak, Ethereum took a major reversal with its price falling all the way close to $700. However, the coin...
Read more
CryptoCurrency News